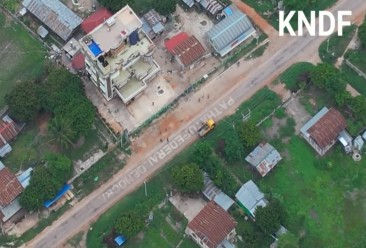 Twenty-four men detained by Karenni resistance forces under suspicion of working for the Myanmar military were released on Thursday, according to the Karenni State Consultative Council (KSCC).

A KSCC statement said that those freed were among 126 people who were in their custody.

“We did an investigation and found that they didn’t commit any serious crimes. Also, they had been detained for too long and it was time we came to a decision, which was to let them go,” a KSCC spokesperson told Myanmar Now, adding that those exonerated had signed a pledge not to engage with the military council.

The 24 people released were reportedly government staff members, labourers and street vendors, and most came from Naypyitaw, Mandalay or Sagaing; around five were from Loikaw, the Karenni (Kayah) State capital.

“They were just people who gave information about a particular region to the military in return for the military’s permission to go to that region. There was nothing more to it,” the spokesperson said.

Also among them were four people arrested in an interception by the Karenni Nationalities Defence Force (KNDF) in Pekhon, southern Shan State, on April 21 of 24 men who were working for the military council’s electricity department accompanied by two army officers from Light Infantry Battalion 336. They were all subsequently detained by the armed group, which formed after the February 2021 coup.

The released individuals were held for a minimum of one month and a maximum of two months, according to the spokesperson. In the past, he added, people have been allowed to leave after as little as three to four days if evidence proving their innocence became available. He did not elaborate on the circumstances surrounding those cases.

The spokesperson described the remaining 102 detainees in KSCC custody as convicted criminals and military informants.

“The ones that are still in detention are the ones against whom we have solid evidence that they were aiding the military in some way. Some were working for the military. Some were involved in drug-related cases and there are other criminals such as robbers and thieves among them as well,” he said.

Suspected junta associates are first brought to the Karenni State Police Department (KSP)—the law enforcement institution founded by the resistance movement—with their cases then examined by members of the movement’s judiciary.

KSP information officer Bo Bo told Myanmar Now in early May that the judiciary committee had been formed of legal experts, anti-junta township and village administrators, leaders of social welfare groups, and prominent women, and that the decision-making body took action against perpetrators in cases where criminal conduct was found to have occurred.

“Our local laws don’t have any provisions on how to deal with military informants, government staff [still working for the junta], and prisoners of war, so we had to form that committee to judge those cases,” Bo Bo said.

Theft and robbery and other common cases are dealt with in accordance with traditional Karenni laws.