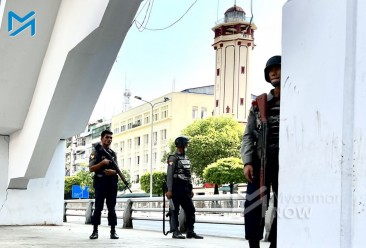 A junta-appointed administrator, his wife, and a suspected military informant were among those killed in at least three shootings in Yangon during a 24-hour period earlier this week.

The incidents occurred on Monday at 3pm in South Dagon Township, 9pm in Twantay, and on Tuesday at 9am in Mingaladon.

Win Naing Tun, the 49-year-old administrator for Shwe Nanthar village in the Htauk Kyant area of Mingaladon, was killed alongside his wife, Haymar Lwin, 42, in the last attack.

Locals told Myanmar Now that six men on two motorcycles opened fire on the couple after they stopped their car when an explosive device went off at the foot of the Daw Ngo bridge in Shwe Nanthar village tract.

They were reportedly taking their daughter and son—aged 12 and 13, respectively—to school at the time of the assault. The children were physically unharmed, local sources said.

Junta forces responded by blocking off roads in the area near where the incident took place and carried out searches of passing vehicles.

At the time of reporting, no anti-junta resistance group had claimed responsibility for the attack.

The previous night, 60-year-old Thein Win of Twantay Township’s Bekho village was assassinated by the Twantay Urban Guerrilla Force after being accused of encouraging the military to attack local civilians for standing up to junta personnel.

“He summoned the military to ‘punish the villagers’ because they had cursed at the junta-appointed administrator of Karen Gaung village,” an information officer in the resistance group said, referring to another community in the area.

In the raid that followed, two villagers were shot dead, he added.

Kyaw Naing, the administrator of South Dagon’s 25th ward, was shot at least twice by two gunmen on a motorcycle on Monday afternoon on Zizawa St in the township, according to a local source.

The Yangon Urban Guerrilla Association—an alliance of 14 resistance forces in the region—claimed responsibility for the shooting. The coalition’s information officer alleged that the man had driven a military vehicle into a group of anti-junta protesters last month.

An associate with him at the time of the guerrillas’ assassination attempt appeared to have been armed by the military and fired back at the gunmen, the spokesperson said.

Kyaw Naing was reportedly sent to South Dagon’s general hospital to be treated for his injuries, but it was not confirmed at the time of reporting if he had survived the attack.

“It should have been enough to teach him to not be on the wrong side of history,” the Yangon guerrilla forces’ representative told Myanmar Now.

Junta targets have frequently come under attack in recent weeks, with incidents occurring in major cities like Yangon and involving either improvised explosives or gunmen.

Four police officers and two city workers were injured when an explosion went off at the heavily guarded western entrance to City Hall in the commercial capital on the morning of July 30.

A ward administrator from Botahtaung Township, Than Win—also known as Bobby—was shot and injured on the corner of Merchant Rd and 42nd St on July 28.

Junta chief Min Aung Hlaing admitted on Monday that more than 2,000 attacks on military personnel had occurred in Yangon since the February 2021 coup.