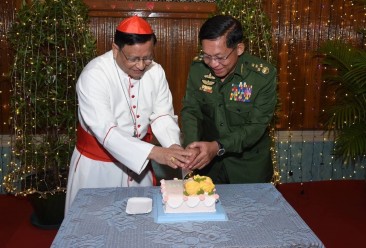 The birthplace of Cardinal Charles Maung Bo—the Archbishop of Yangon—was among five villages hit in an aerial attack by the Myanmar army in Sagaing Region on Monday, according to local sources and members of the anti-junta resistance.

Three helicopters reportedly fired artillery shells at the 700-household village of Mone Hla in Khin-U Township for over an hour starting just before 10am. Also targeted were the nearby communities of Pin Sein Khin, Kyi Su, Ka Lon and Thayet Taw on the western shore of the Mu River in Ye-U Township.

Although residents of the villages fled when the attack began and were believed to have escaped injury, religious structures were reportedly targeted.

Myanmar Now was unable to confirm if there were any casualties in the assault.

“They fired at the church,” a woman from Mone Hla said. “The nuns and priest had to flee into the woods.”

A leader within the Armed Revolutionary Force (ARF), a Khin-U based resistance group, confirmed that a church, two Buddhist monasteries and a pagoda adjoining one of the monasteries were damaged in Mone Hla.

“I think the military thought the pagoda compound was a defence force base as it had good concrete fences. However, no one was in the compound at that time,” the ARF leader said.

Cardinal Bo, who was born in Mone Hla but resides in Yangon, celebrated last Christmas with junta chief Min Aung Hlaing less than a year after the military leader staged a coup in February 2021. That May, he had released a statement calling on the military to refrain from targeting religious sites after an artillery strike killed four people who were sheltering in a church in Karenni State.

Monday marked the first time that his native village had been attacked since the coup.

“We heard about helicopters coming from the Northwestern Military Command but we didn’t think they’d come here as there were no battles at all in the area,” the ARF leader said.

He speculated that the airstrike was carried out in order to “clear” the area for a 120-soldier column stationed two miles away in the village of Thar Wut Hti to march north, although it was not known at the time of reporting where they were headed.

The military council has released no information on the airstrikes.

Cardinal Bo’s secretary did not respond to calls on Tuesday seeking comment on the military’s attack on Mone Hla.