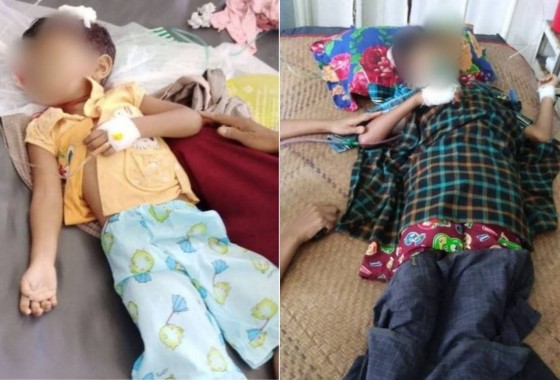 The incident occurred early in the morning, soon after Karen National Liberation Army (KNLA) forces attacked a junta army base on the Shwegyin-Kyaukkyi road, a member of the Yoma People’s Defence Force (PDF) told Myanmar Now.

After abandoning the base, the regime forces opened fire with heavy artillery, killing a man in his 60s and a woman in her 50s in the village of Than Seik, the Yoma PDF member said.

A three-year-old girl, a 10-year-old boy, and another person who had not yet been identified at the time of reporting were injured, he added.

“I heard that one junta soldier was injured in the initial attack, but we haven’t confirmed that yet. As far as I know, there were no KNLA casualties,” he said, adding that the entire population of the village has since fled the area.

Than Seik is located about 20km north of the town of Shwegyin. The area is part of eastern Bago’s Nyaunglebin District, which is KNLA Brigade 3 territory.

According to a person who is assisting displaced civilians, the two injured children were transferred to Yangon General Hospital on Tuesday evening. The boy was said to be in critical condition.

Last Wednesday, the Karen National Union (KNU), the political wing of the KNLA, released a statement saying that there had been a total of 25 clashes in Nyaunglebin in the first two weeks of August. At least 57 junta soldiers were killed in the fighting, the group said.

In addition to using heavy artillery, the military has also carried out airstrikes in the area. Locals have also accused regime troops of abducting villagers and stealing livestock.

According to the KNU, nearly 62,000 civilians have been displaced by recent fighting in Nyaunglebin. The total for all areas under KNU control, including in Mon and Karen (Kayin) states, is more than 300,000, it said.

Earlier this month, the KNU reported that there were more than 150,000 displaced civilians in its territory in Bago Region and Mon State alone.

In the absence of support from international relief agencies, which have not been allowed to operate in much of Myanmar, many local groups have turned to online donations to meet the growing needs of conflict-affected civilians in the country.