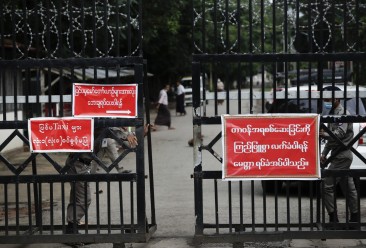 A judge and several members of his legal team were the targets of an assassination attempt near Yangon’s Insein Prison on Tuesday, according to sources in the area.

At around 12:30pm, a car parked in an alleyway next to Insein market began pursuing Hlegu Township judge Zin Waiyan Paing and his team as they were leaving the prison, witnesses said.

Several gunshots were fired at the judge’s vehicle as it fled along the Hlaing River Road, shattering its rear window and injuring one of its passengers, a person who witnessed the incident told Myanmar Now.

A man who was driving in another vehicle was also injured and was taken to North Okkalapa Hospital, he added.

According to a woman who was visiting the prison at the time of the attack, police and military personnel arrived in trucks shortly after the shooting to conduct a search of the area.

“I heard that the judge survived because another car passed between the two cars during the attack,” she said.

A source close to several Yangon urban guerrilla groups claimed that the car that was carrying the judge was hit at least seven times before the assailants fled the scene.

Insein Prison and its staff have been the target of several attacks since Myanmar’s junta executed prominent dissidents Ko Jimmy and Phyo Zeyar Thaw and two other regime opponents there late last month.

Judge Zin Waiyan Paing, the target of Tuesday’s attack, was reportedly involved in cases being conducted at a special court set up inside the prison to prosecute protesters and others opposed to last year’s coup.

In another incident that occurred early last week, members of a revolutionary group reportedly used a 40mm grenade launcher to fire on the prison in the early hours of August 22.

The house of a prison officer was damaged in the attack and a number of people were injured, the group said.

Myanmar Now has been unable to independently confirm these claims.

On Monday, the junta announced that it had made several arrests in connection with that incident, but the group that claimed responsibility for the attack has yet to release a statement.