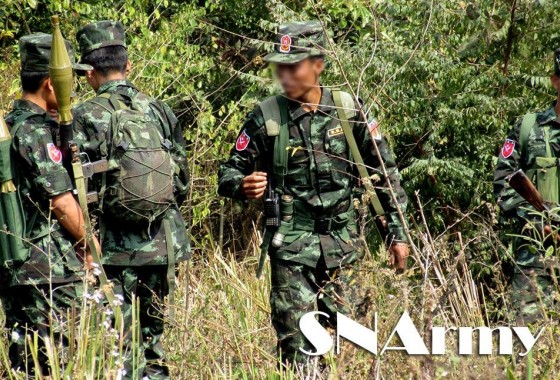 Anti-regime forces attacked two bases run by the Shanni Nationalities Army (SNA) in northern Sagaing Region on Wednesday, according to a spokesperson for the group.

Both incidents occurred in townships bordering Kachin State, where SNA and junta troops were accused of torching a village in Hpakant Township early last month.

“They started firing heavy artillery at us in the morning, but withdrew after we fired back. Then they fired some more in the evening,” he said.

Another SNA base near Nat Nan, a village in Homalin Township, was also targeted at around the same time, he added.

“We have a front-line base around there. They fired heavy artillery at it on the morning of August 31,” said the SNA spokesperson, adding that the anti-regime forces appeared to be deliberately trying to provoke a conflict in order to expand their territory in the area.

Myanmar Now attempted to reach the KIA’s information officer, Col Naw Bu, for comment, but did not receive a response.

An officer of the Banmauk PDF confirmed that a battle took place in Anauk Kone, but said that he couldn’t disclose any further details without authorisation.

The KIA and its PDF allies have clashed repeatedly with the SNA in recent weeks, according to local sources.

On August 19, PDF forces attacked a coalition of SNA troops and members of the pro-regime Pyu Saw Htee militia in Sagaing’s Paungbyin Township. Fighting was also reported near Nam Taung, a village in Banmauk Township, on August 20.

Following a conference held in Homalin Township last Saturday, the SNA said that it would be collaborating with Myanmar’s military “in accordance with the will of the people.”

The SNA was founded in 1989 and has had clashes with both Myanmar’s military and the KIA in the past.