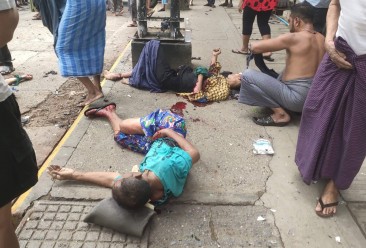 The mother and sister of a man who was killed by a bomb blast in Yangon on Tuesday were held for questioning the next day, according to a neighbour of the family.

“They were taken in briefly to be questioned, but they came back at around 10pm that night,” said a resident of the same ward in Yangon’s Dawbon Township where the victim had lived with his family.

Htein Lin Htun, 25, was the only person to die when a bomb went off near a crowded bus stop at the corner of Anawrahta Rd and 35th St in Kyauktada Township at around 3:30pm on Tuesday. Nine others were injured.

At a press conference held on Wednesday, junta spokesperson Gen Zaw Min Tun suggested that the dead man might have been the perpetrator of the attack.

“We went through his phone and saw texts that included conversations about a bombing order,” he said, adding that Htein Lin Htun had allegedly received training as a member of the anti-regime People’s Defence Force (PDF).

Myanmar Now attempted to contact his family for comment on the military’s claims, but did not receive a reply.

According to the neighbour, who did not want to be identified, Htein Lin Htun was not well known to others living in the ward.

Members of urban guerrilla groups active in Yangon said they didn’t believe the attack was the work of any of the city’s many anti-junta resistance forces.

Noting that the blast appeared to have been caused by a C-4 explosive, one resistance fighter said he found the regime’s account of what happened to be completely implausible.

“We could guess what type of explosive was used from the explosion itself. But it’s almost impossible for any urban guerrilla group to make a C-4 bomb, because the material is just too expensive,” he said.

“This is just the military trying to frame the resistance groups,” he added.

He also said that the junta’s discovery of two undetonated bombs in the same area also raised questions about who was really behind the blast.

Numerous guerrilla groups have been formed in Myanmar’s two largest cities, Yangon and Mandalay, in the wake of brutal crackdowns on protests against last year’s military coup.

While these groups have carried out many attacks on junta targets, including civilians accused of acting as informants for the military, they have not been linked to any incidents involving members of the general public.

All groups opposed to the restoration of military rule in Myanmar, including the country’s shadow National Unity Government (NUG), have been designated as terrorist organisations by the regime.

In a statement released shortly after Tuesday’s explosion, the NUG’s defence ministry denounced “such a violent attack that targets civilians.”

Naing Htoo Aung, the ministry’s secretary, told Myanmar Now that no groups operating under the command of the NUG were responsible for the incident.

He also suggested that the bombing could have been carried out to create “misunderstanding” between the public and the NUG’s armed wing, the PDF.

As tensions rose over the incident, prison guards reportedly attacked an inmate with a baton, prompting others who witnessed the assault to rush to his defence.

At least one prisoner, 33-year-old Wai Yan Phyo, was killed in the ensuing melee. In a statement, the regime claimed that he had been beaten to death by fellow inmates.

The statement also blamed the incident on the prisoners, accusing them of attacking prison guards.

Mae Gyi, who is also known as Win Min Htet, has not been seen since he was separated from the other prisoners, raising fears about his safety.

“It would be some consolation to his family if the authorities confirmed whether he was dead or alive,” said Myanmar Now’s source, who spoke on condition of anonymity.

On January 7, junta troops reportedly arrested Sandar Aye, the wife of political prisoner Win Htun Aung, who was among the eight inmates who joined the protest led by Mae Gyi.

The reason for her arrest remains unclear, but there were concerns that she was being targeted as retaliation for her husband’s alleged role in stoking unrest.

On Sunday, the Assistance Association for Political Prisoners (AAPP) released a statement condemning the junta’s treatment of Pathein Prison inmates as a violation of the UN Convention Against Torture.

“This is even worse than what we have heard of from other prisons,” an AAPP official told Myanmar Now. “This is a grave criminal offence.”

The AAPP official also noted that the International Committee of the Red Cross has not been permitted to conduct prison inspections since the military seized power nearly two years ago, heightening the likelihood of serious abuses.

There have been a number of instances of prisoners being killed behind bars since the February 2021 coup. In March of last year, seven inmates of Kalay Prison in Sagaing Region were shot dead by prison authorities, allegedly for attempting to escape.

The use of excessive force by prison authorities has long been a problem in Myanmar. In May 2019, a riot inside Shwebo Prison in Sagaing resulted in the deaths of four prisoners.

According to AAPP—which keeps records on political prisoners arrested, sentenced, and released in Myanmar—at least 13,429 civilians throughout the country remain in detention for opposing the military regime as of January 11.