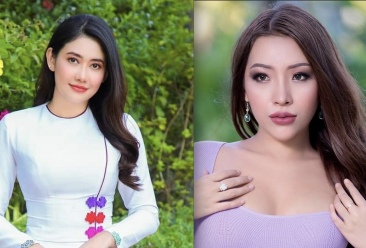 Junta-controlled media announced on Friday night that the military council had brought charges against two well-known models for acts deemed to cause “harm to Myanmar culture.”

Nang Mwe San and Thinzar Wint Kyaw—both 34—are accused of publishing sexually revealing content on adult entertainment sites for profit, and have been charged under Section 33a of the 2004 Electronic Transactions Law, according to the statement.

The statute in question prohibits actions which are “detrimental to the security of the State or prevalence of law and order or community peace and tranquillity or national solidarity or national economy or national culture.”

If convicted, the women face a prison sentence of seven to 15 years.

The junta’s announcement did not disclose when Thinzar Wint Kyaw and Nang Mwe San were arrested. It said that the investigation was ongoing, and that military authorities would take further legal action against other individuals whose activities allegedly threatened “Myanmar women’s dignity.”

In early July, Thinzar Wint Kyaw, who is also an actress, visited the headquarters of the Shan State Progress Party (SSPP) in Wanhai, Shan State, and attended the wedding of the daughter of the ethnic armed organisation’s spokesperson Sai Hsu. Days after photos of her attendance at the wedding in SSPP uniform went viral, she was also briefly detained by the regime.

At the time of reporting, officials from the Shan armed group were in the military capital of Naypyitaw for a “peace talk” with junta representatives.

Nang Mwe San is a former medical doctor and one of Myanmar’s most famous models. The junta invalidated her passport in March, a move that barred her from leaving the country.

In 2019, the national medical council revoked her medical license and ordered her to stop posting sexually revealing content online after she shared photos of herself in a bikini and lingerie.

She joined the subscription service OnlyFans as a content creator in 2020, a move which reportedly earned her thousands of dollars monthly.

Myanmar Now is an independent news service providing free, accurate and unbiased news to the people of Myanmar in Burmese and English.

Independent media is under attack in Myanmar… help us hold the powerful to account.

Aung Zaw Oo, the imprisoned leader of a People’s Defence Force (PDF) group based in southern Shan State, died on Tuesday of injuries inflicted on him during interrogation, according to a member of his group.

The 43-year-old resistance leader, who had been detained at the state’s Taung Lay Lone Prison for more than a year, was receiving treatment at the Sao San Tun Hospital in Taunggyi at the time of his death, the PDF member said.

He had reportedly been admitted to the hospital a week ago with broken ribs and other injuries.

Aung Zaw Oo—also known as Mohammed Hpwar Ruu—was arrested in August of last year and charged under Myanmar’s Anti-Terrorism Law for his role in leading the Southern Shan PDF. He was sentenced to seven years in prison in May.

He was accused of forming and funding the group and another PDF based in Taunggyi in collaboration with Myanmar’s elected National Unity Government, which the country’s military regime has designated a terrorist organisation.

Sithu Maung, an elected parliamentarian and former student leader who was also a friend of the victim, noted that the only “weapon” found on Aung Zaw Oo at the time of his arrest was a walkie-talkie.

“I kept in touch with him during the revolution and I was providing him with help. He was a very charitable person. He was also running a charity group together with a youth network,” said Sithu Maung.

Like Sithu Maung, Aung Zaw Oo had also been involved in anti-junta activities during a wave of protests in 2007. He was later arrested and served fours years of a six-year prison sentence in Lashio, until his release in 2012.

Aung Zaw Oo was buried on Tuesday in accordance with Islamic tradition, according to Sithu Maung.

Myat Min, of the Taunggyi PDF, and Kyaw Khant, of the Ywangan Urban Guerrilla Force, were captured during an overnight check at a monastery in Nyaungshwe Township on August 15.

Two days earlier, Ko Lin, the leader of Mandalay’s Kyaukse District PDF, was killed in Ywangan Township along with another member of his group and an unidentified individual.

Junta forces in Kalay arrest and kill man accused of making guns for resistance fighters
A family friend said Kyaw Min Oo, who owned a welding and lathing workshop, had never made weapons…

The Bo Tiger People’ Defence Force (PDF), an anti-regime group based in Sagaing Region’s Wetlet Township, has called on Myanmar’s civilian National Unity Government (NUG) to intervene in a dispute with another PDF group.

In a statement released on Sunday, the Bo Tiger PDF—which is not part of the PDF established last year by the NUG—said that the Shwebo District PDF had threatened it with “elimination” following a clash last week.

That incident, which stemmed from accusations that the Bo Tiger PDF was demanding money from travellers passing through the township, resulted in the deaths of two of its members, the statement said. Twelve more were injured and several others were captured, it added.

Both of the groups involved accused the other of firing first

The group said it filed a formal complaint last Thursday, a day after the attack. It also vowed to refrain from retaliating while the incident is being investigated, but said that it would fight back if provoked.

Myanmar Now attempted to reach Kyar Gyi, the leader of the Bo Tiger PDF, for comment, but a member of the group said that he was unavailable due to illness.

The commander of Shwebo District PDF Battalion 2, which is based in Wetlet Township, said that no action has so far been taken by the NUG.

“We only did what we did because there were complaints about Kyar Gyi’s group. If they believe they are right, they can come and take legal action against us and we will let their people go,” he said.

He added that the action against the Bo Tiger group had actually been taken by a local defence force, with the Shwebo District PDF merely providing backup.

“We had no intention of attacking them in the first place. We only fired back after they started shooting at us,” he said.

At the time of reporting, the captured Bo Tiger members were still being held in custody. According to the Shwebo District PDF commander, “necessary actions” would be taken against them by the township administration team.

Myanmar Now was unable to reach Naing Htoo Aung, the secretary of the NUG’s Ministry of Defence, for comment. The ministry is responsible for all PDF groups under the NUG’s command, including the Shwebo District PDF.

The leader of another anti-regime group based in Wetlet Township said that he regretted the outbreak of hostilities among resistance forces.

“There was no reason to attack the Bo Tiger group, even if it was in the wrong. Every member matters at this moment. This could destroy entire organisation,” he said, adding that the Bo Tiger group had played an important role in a number of operations.

Villagers have been assaulted and displaced in a series of recent junta raids in southern Myaung, according to local sources in the Sagaing Region township.

Some 150 soldiers from two junta columns attacked more than 10 villages on September 3 and 4, capturing and interrogating at least 15 residents, a spokesperson from the Civil Defence and Security Organisation of Myaung (CDSOM), the resistance coalition, told Myanmar Now.

“They usually only come after midnight. I think they are trying to regain control over the region,” the group’s information officer, Nway Oo, told Myanmar Now.

More than 5,000 people from the villages had fled their homes at the time of reporting.

One local man was hospitalised on September 5 after being tortured by the occupying Myanmar army troops, the CDSOM spokesperson said.

“They beat one of the men so badly that he was sent to the hospital in a social welfare vehicle. We still don’t know which village he was from or if he survived,” Nway Oo explained.

The series of assaults followed a clash between resistance forces and the military in Myaung on September 2 in which three junta personnel and one guerrilla fighter were reportedly killed.

Anti-junta defence forces in the area have been assisting with providing shelter and food to the internally displaced persons (IDP) in Myaung, but are facing difficulties in meeting the growing humanitarian needs, the coalition reported.

On August 31, CDSOM’s information officer said that two civilians were killed and three injured after a military artillery shell hit an IDP camp in Zee Kyun, also in Myaung Township, where some 200 people from the villages of Bu Khaing, Thayet Thar and Kyauk Yit had been sheltering.