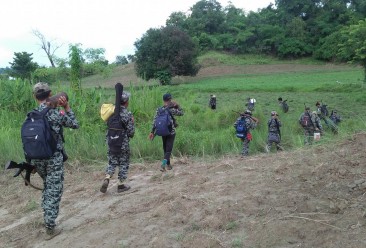 The Myanmar army has continued to lay siege to several communities in southern Sagaing Region over the past two weeks, with resistance groups using explosives to ambush the junta columns responsible for the attacks.

Around 20 villages in the townships of Yinmabin, Pale and Kani—which are also strongholds of armed resistance forces west of the Chindwin River—have been targeted since early August as the military traverses the area.

The same army columns that launched a three-day raid on the village of Yin Paung Taing in Yinmabin on August 11, killing at least 18 people, have been seen by locals travelling into Pale and more recently, entering Kani. The troops took more than 20 men as porters and hostages when they left Yin Paung Taing, only three of whom had been released at the time of reporting.

The 60 soldiers went on to raid at least six more villages at the township border between Yinmabin and Pale, which lies to the south. They travelled north and arrived at the village of Ka Paing – Thee Kone in Yinmabin on August 18, where they clashed with local anti-junta defence forces.

Four members of the resistance and one civilian were killed there, according to local sources.

The civilian was a 68-year-old man whose body was found the next day in one of 200 houses torched by the military during the attack.

Among the resistance fighters killed in the clash was a 17-year-old boy. Only one of the four slain defence force members was found to have been shot to death; three were killed by artillery shells or fatally stabbed. They belonged to a local guerrilla group called the Sayar San People’s Defence Force (PDF), named for the leader of an anti-colonial rebellion in Myanmar nearly 100 years ago.

“[The soldiers] set houses on fire in every village they pass through. They do so whether or not we engage them in a clash. So we fought,” a squadron commander from the Sayar San PDF told Myanmar Now.

Eighteen people are found dead after a prolonged Myanmar army assault on a Yinmabin Township village involving airstrikes, a ground offensive and days of occupation

He added that much of the population of the targeted communities west of the Chindwin River had been forced to flee the recent raids and had been staying in other communities or hiding in the woods.

“Those families affected by the fires left for their relatives’ homes in other nearby areas, and those who were not affected didn’t dare to stay in their own houses anymore,” he explained.

Detailed figures on the number of locals displaced by the attacks were not available at the time of reporting.

By Tuesday, the troops in question had arrived in Kani Township, north of Yinmabin. Local defence forces ambushed the column several times, setting up improvised explosive devices along the road connecting the Sagaing cities of Monywa and Kalaywa—part of the highway that links India, Myanmar and Thailand and passes through Kani.

A member of a Kani-based resistance group said that the junta had suffered heavy casualties during the explosive attacks, but Myanmar Now was unable to verify his claim.