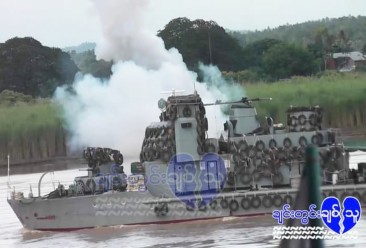 Members of the resistance accused junta forces in western Sagaing Region’s Paungbyin Township of killing four civilians and torching more than 300 households in the community earlier this week.

A column of around 80 Myanmar army troops attacked Tha Nga, situated on the eastern banks of Chindwin River, with 60mm artillery shells on Monday afternoon before overrunning the village, said Aung Zay, a spokesperson for the Pyaungbin chapter of the anti-junta People’s Defence Force (PDF).

The troops reportedly travelled from the town of Mawleik, some 30 miles southwest of Tha Nga, located on the opposite side of the Chindwin.

Around 60 locals including elderly people were trapped in the village when the soldiers attacked, according to Aung Zay.

He added that the civilian casualties and damage to the community were discovered the next day after the soldiers left Tha Nga after occupying a monastery overnight. The identities of the deceased were not confirmed at the time of reporting.

The village, located at the southern edge of Paungbyin, has 500 households and a population of more than 4,000 people.

On August 16, a combined force of junta soldiers and allied Pyu Saw Htee militia members attempted to destroy two Paungbyin PDF camps located a few miles outside of the township’s administrative centre, Aung Zay said. The attack reportedly lasted around half an hour, with the regime troops retreating after one was killed.

Three days later, the PDF said that they used explosives to attack a coalition made up of militia members and troops from the Shanni Nationalities Army, an armed group accused of fighting alongside the Myanmar military.

On August 21, a six-vessel naval flotilla travelling down the Chindwin River reportedly shot at villages along the waterway using RPGs and machine guns. Several Pyu Saw Htee members, junta troops, and prisoners en route to relocation after previously being held in the town of Hkamti—more than 130 miles north of Paungbyin—were on board at the time of the assault, according to the PDF spokesperson.

Shells fired from the ships injured at least two locals who were living near the Chindwin, he said, adding his resistance force did not attack that same unit when they had travelled upstream to Hkamti on August 6.

Myanmar Now is unable to independently verify the spokesperson’s accounts.

The military has not released any information on its activities in Paungbyin.

During his August 17 meeting with UN Special Envoy on Myanmar Noeleen Heyzer, junta chief Min Aung Hlaing denied accusations that his armed forces have torched houses in villages across the country.