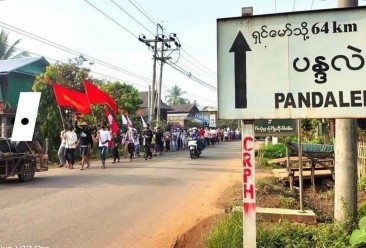 Six of the arrests were made in the villages of Hin Cho Taw and Thapyay Shaung, about 20km south of the town of Launglon, late Thursday night, while another six were reported in Maungmakan, a village a similar distance to the north of the town, at around 3am Friday, sources said.

According to residents of Maungmakan, the four men and two women arrested there were taken into custody during nightly guest-list checks.

It appeared that the military had been tipped off about the presence of anti-regime activists in the village, but had failed to capture its intended targets, one resident told Myanmar Now.

“We told them the ones they wanted had already fled the country, but they kept insisting that we turn over the people they ended up arresting. So innocent people were detained at the say so of military informants,” the villager said.

The military has reportedly been carrying out frequent house raids in the area, forcing many to leave rather than risk arrest.

“They keep using the nightly guest-list checks as an excuse to enter people’s homes and search for wanted individuals. If they can’t find them, they just arrest innocent family members,” said a local man.

“Nobody dares to stay in the village anymore. Everyone’s fled, because they can’t handle the stress of having to worry about being arrested,” he added.

Myanmar Now has been unable to reach the Launglon central police station, where the detained civilians are reportedly being held, for further information.

Resistance forces have carried out a number of successful attacks on military targets in Launglon Township since last year. In recent months, however, the junta has stepped up its efforts to crush anti-regime elements in the township.

In late June, soldiers in fishing boats carried out a raid on a Launglon People’s Defence Force (PDF) base, capturing one member of the group and seizing a large number of weapons and other military equipment, including handmade rifles, mortars, ammunition, and drones.

This came just days after a military column entered the village of Ka Det Gyi, less than 3km from Thapyay Shaung, and killed three civilians, according to a local strike committee.

Late last year, soldiers burned down the home of an anti-coup activist and arrested the mother of a Tanintharyi protest leader after local guerrillas shot and killed a police officer.

Months earlier, a 16-year-old boy was shot dead by soldiers stationed at a monastery in Launglon Township for being out after dark.