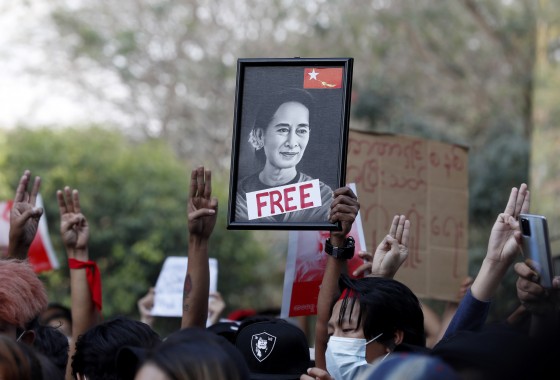 Demonstrators hold a portrait of detained State Counsellor Aung San Suu Kyi while flashing the three-finger salute, a symbol of resistance, during an anti-military protest at Hledan junction in Yangon on February 8, 2021 (EPA)

Zabuthiri Township judge Maung Maung Khin handed down the sentence at a junta-controlled closed court in the Naypyitaw Detention Centre. The three leaders from the ousted civilian government—whose National League for Democracy (NLD) party won the said election in a landslide—were accused of violating Section 130a of the Penal Code by unfairly influencing the election commission.

The military council’s allegations of voter fraud are based on the reported discovery of 2,000 double votes, found after one year of investigation carried out since the February 2011 coup. Some 75 percent of Myanmar’s more than 37m registered voters participated in the 2020 general election, according to the International Foundation for Electoral Systems.

However, the junta vowed to confront the alleged fraud with legal action against several NLD leaders and party members, as well as the more than 420 members of the previous Union Election Commission and nearly 2,500 members of local election commissions.

Suu Kyi, who turned 77 in June, was sentenced to 17 years’ imprisonment in December, January, April and August for 10 other convictions, bringing her total term to 20 years including Friday’s ruling.

Most recently, she was handed a six-year sentence for four corruption charges after the military accused her of abusing her position as party leader to benefit a private foundation named after her mother, Daw Khin Kyi, as well as an affiliated project.

Win Myint is also facing five corruption charges related to the rental and the purchase of helicopters for disaster relief during the NLD’s administration. Including Friday’s conviction, he has been sentenced to five years in prison for three charges.

Win Myint was initially sentenced to four years in prison, along with Suu Kyi, on incitement and disaster management charges, but the sentence was reduced by half on the same day it was handed down.

Ousted Union Government minister Min Thu has also been charged with corruption under Section 55 of the Penal Code, which carries a prison sentence of up to 15 years. He is accused of accepting 30m kyat (nearly US$17,000) worth of NLD t-shirts and backpacks from a business owner during the party’s rallies in the lead-up to the 2020 general election.

Even if genuine, the cases would amount to a fraction of a percentage of the millions of votes cast to re-elect Aung San Suu Kyi’s government