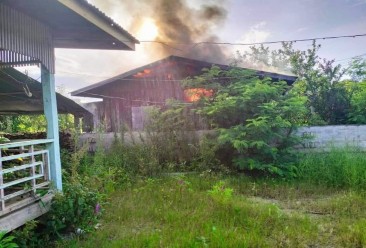 Around 50 regime soldiers are currently stationed in a Catholic church in the southern Shan State town of Moebye, according to resistance forces active in the area.

“They specifically chose a church because they knew we wouldn’t attack them there,” he said, adding that the church, which is in the town’s Pwe Kone Ward 2, has been occupied since around 2am on Monday.

Priests, nuns and students who were in the church when the soldiers arrived were detained and not released until around 8am, he said.

A number of students were forced to lie face down on the ground with their hands tied behind their backs, he added, citing church sources.

Myanmar Now has been unable to contact any of the affected individuals for confirmation.

The PDF commander also reported a clash on Monday with another military column that was stationed inside the fire station in Moebye’s Paw Oo Ward 2.

The soldiers left the fire station early the next day, he added.

Regime forces in the area also reportedly fired heavy artillery until around 8pm, injuring one man and setting a house on fire, according to a member of a local rescue team.

“Many locals are trapped in their villages and wards. Some have fled to monasteries, but very few have actually been able to leave,” he said.

A member of another PDF group active in the area said that reinforcements have been arriving in the town to support military operations in Wari Suu Palai, a village on the road that links Moebye to Demoso in neighbouring Karenni (Kayah) State.

The PDF member complained that the soldiers have been using churches and human shields in order to deter attacks by resistance forces.

“It’s hard for us to attack them when they use civilians and religious buildings as covers,” he said.

Myanmar’s military has been accused of targeting churches in parts of the country with large Christian communities. In May of last year, it shelled a Catholic church near the Karenni State capital Loikaw, killing four and critically injuring eight.

That action prompted Cardinal Charles Maung Bo, the archbishop of Yangon, to call on the military to spare churches from its attacks.

Despite receiving no assurance that the sanctity of religious buildings would be respected, however, the cardinal later controversially attended a Christmas celebration with junta leader Min Aung Hlaing.

On Christmas Eve, the day after that encounter, regime troops massacred dozens of civilians, including children and aid workers, in Karenni State’s Hpruso Township.

Earlier this year, Moebye was occupied by soldiers from Light Infantry Division 66, the unit implicated in that atrocity. The troops currently in the town are from the same division.

On Monday, the military carried out airstrikes on Mone Hla, a village in Sagaing Region’s Khin-U Township that is also the birthplace of Cardinal Bo.

Myanmar Now has attempted to reach the cardinal for comment, but so far all calls have gone unanswered.

The move came after activist group Justice For Myanmar urged ANZ, Singapore’s UOB and Vietnam’s BIDV to stop dealing with Myanmar military-owned Innwa Bank earlier this month, citing leaked transaction files of payments between the banks. The group said at the time that continued international engagement with Innwa Bank illustrated “a failure of governments to take a coordinated approach to isolated military conglomerates and cutting off the junta’s sources of revenue.”

Five members of Yangon-based urban guerrilla force Wi Moutti were arrested on November 22 in Yangon, according to a spokesperson for the group. The junta authorities tracked them down after their national identification cards, along with explosives and ammunition, were allegedly seized in a raid earlier this month. The regime announced the next day that four men and a woman who were members of an anti-regime guerrilla group were captured at two separate locations in Yangon. In its statement, the military accused them of stealing 20m kyat (nearly US$9,500) from a ticket counter at the train station in Pazundaung Township on November 1, which the spokesperson of Wi Moutti rejected as untrue. Myanmar Now is unable to verify either parties’ claims independently.

Two regime-appointed local administrators were shot dead by gunmen in Yangon’s Dagon Seikkan Township on the morning of November 28, according to a source within the police force.

Ward administrator Kyaw Than and 100-household administrator San Win Hlaing sustained injuries in their abdomen and thighs and died en route to the hospital, said the source. Pro-military media channels reported that the two men were at a Buddhist community hall in Dagon Seikkan’s 81st Ward when the two gunmen arrived, initially saying they wanted to report guest registration before opening fire. A driver named Aung Naing Thu was also injured in the shooting but survived the attack. No Yangon-based urban guerrilla group has claimed responsibility for the shooting so far.

Ousted Rakhine State chief minister Nyi Pu, who is currently being held in Sittwe Prison, is losing more of his eyesight as his cataracts progress and he is denied a medical intervention, a relative told Myanmar Now. Kyi Kyi Oo, his daughter, said that he developed the eye condition prior to the coup and that it had worsened since he was imprisoned in February 2021. She said that the family has not been able to see him in person, despite visiting the detention centre on multiple occasions.

Nyi Pu has been handed a sentence of more than 11 years for various criminal charges filed by the military, including incitement, corruption and voter fraud. He was arrested in Gwa on February 1 as the coup unfolded, along with other chief ministers appointed by the elected NLD government. He was initially released the following day and placed under house arrest, but was again imprisoned on February 10.