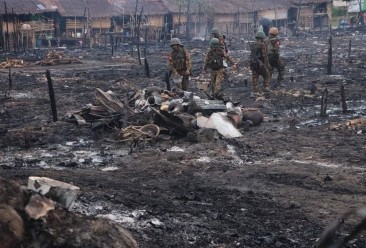 Residents of Kyauktaw in northern Rakhine State say that junta troops stationed at a nearby pagoda opened fire with heavy artillery on two camps for displaced villagers on Monday.

Internally displaced persons (IDPs) staying at the Nyaung Chaung and Mahamuni camps were forced to flee when the shelling began at around 8pm, local sources reported.

“There was no clash last night. The military just started firing light and heavy weapons at the IDP camps from the pagoda. I think they fired around 30 artillery rounds,” a local woman told Myanmar Now.

A man staying at the Mahamuni camp said that the incident terrified people living in the two camps, which were established during a previous conflict between the Myanmar military and the Arakan Army (AA) that has recently shown signs of reigniting.

“Everyone was in a state of panic. They didn’t calm down until the shelling finally stopped,” said the man, who spoke on condition of anonymity.

The incident came just days after troops stationed at the Mahamuni pagoda, located about 10km northeast of Kyauktaw, reportedly fired several shots in the direction of the nearby Mahamuni IDP camp.

“They also fired their guns late last week, and a few stray bullets came into the camp,” said the camp resident.

“Everyone was pretty scared and shaken, then, too,” he added.

According to another resident of the area, the initial shots fired on Monday came from Military Operations Command (MOC) 9, based in Kyauktaw.

“We heard MOC 9 fire three times with heavy artillery at around 8 o’clock last night. I heard they were aiming at the Mahamuni camp, and that the IDPs there had to flee,” the Kyauktaw local told Myanmar Now on Tuesday.

A woman who lives near the pagoda said that the military has also deployed more soldiers there in recent days.

“There were only about 60 of them there before, but around 130 more have just recently arrived,” she said.

Last week, there were also rumours that a soldier based at the pagoda had deserted. However, these reports could not be confirmed.

No explanation has been given for Monday’s incident, and regime officials were not available for comment.

Tensions have been high in Rakhine State since November of last year, when a number of clashes broke out between the military and the AA for the first time since late 2020.

Since then, the military has been increasing its activities in the state and in parts of neighbouring Chin State where the AA is also active.

The Mahamuni pagoda is just one of a number of religious sites, including mosques and monasteries, that have been commandeered for use as base camps for reinforcements arriving in Rakhine in recent months, according to locals.

The Mahamuni camp was also the scene of a devastating fire less than a month ago.

On May 9, a blaze destroyed more than half of the camp’s 432 shelters, forcing around a thousand IDPs to take up temporary residence at a nearby train station.

The cause of the fire was unknown, but it did not appear to be related to recent tensions in the area.