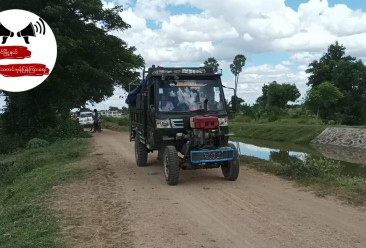 At least 50 civilians, including injured elderly people and children, have been trapped in a village in Sagaing Region’s Yinmabin Township since the military launched an airstrike on the location last week despite there being no clashes there, local sources said.

The 800-household village of Yin Paung Taing, located 10 miles outside of Yinmabin’s administrative centre, was reportedly targeted by 45 minutes of gunfire from three fighter jets on the afternoon of August 11, wounding several people.

“Fifteen to 20 of the civilians trapped in the village have been injured. Over 20 more injured villagers also managed to escape,” said Bala, an officer in the Young Ranger Force—a local anti-junta resistance group.

He explained that his members were unable to evacuate all of the village’s residents due to the continued presence of military aircraft over Yin Paung Taing throughout the evening.

Following the attack, Myanmar army helicopters airlifted some 60 troops into the area, who immediately began firing both heavy and light weapons at surrounding villages in addition to Yin Paung Taing.

“Locals are still able to flee to nearby villages when the on-ground troops attack them, but there is no place left for them to run during airstrikes,” Bala told Myanmar Now.

Pro-junta social media pages reported that the military raided Yin Paung Taing after receiving intel that local resistance forces were based in the village. They stated that seven guerrilla fighters were killed in the attack, and weapons—including five guns and two grenade launchers—were seized, along with ammunition.

The military council has not released any statement regarding the assault on the village.

Local defence forces were unable to estimate the number of casualties at the time of reporting, noting that the occupation of Yin Paung Taing was ongoing, and that the troops had started torching homes.

The military has frequently used helicopters to both attack villages and airlift soldiers to rural locations in Sagaing Region, including in Ayadaw, Depayin, Myinmu and Ye-U townships.

Several civilians were killed in an early August raid on the village of Letpan Kyin in Myinmu Township that involved both air and ground attacks, and also resulted in the deaths of 10 resistance fighters.