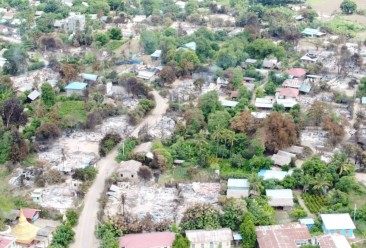 The village of Mu Kan Gyi, seen on August 11 (Supplied)

Mu Kan Gyi, an important commercial centre in Sagaing Region’s Depayin Township, is largely in ruins after a three-day rampage by regime forces early last week, according to local sources.

Residents of the village of more than 800 households, located on the Muu River some 30km southeast of the town of Depayin, said that a number of buildings were still burning there Friday morning, two days after an occupation that began on Monday had ended.

“Much of the village was reduced to ashes. Smoke was rising from haystacks. Pieces of charred rooftops were scattered all over the place. Everything inside the houses was lost as well,” said a resident who had returned to survey the damage.

Around 100 junta troops carried out the arson attacks, which residents said targeted the larger homes and businesses in the prosperous village.

One woman said she lost not only her home but also her rice mill and stockpiles of rice, which she valued at a total of 100m kyat ($47,500).

“I don’t even dare go back there now,” she said. “I have nothing to go back to. I don’t know what I am supposed to do anymore,” she said.

Meanwhile, another army column sent from neighbouring Ayadaw Township continues to occupy Let Hlote, a village about 3km from Mu Kan Gyi, further deterring the return of around 5,000 displaced villagers.

“There’s nowhere for them to stay even if they return to the village. We’re going to have to try to accommodate them in monasteries,” the leader of a local resistance group told Myanmar Now.

There are around a dozen monasteries in and around Mu Kan Gyi, which as a major hub for commercial activity in the area also has streets filled with shops and rice mills.

According to local defence forces, the junta troops that carried out the arson attacks on Mu Kan Gyi are from Light Infantry Battalion 376, stationed in the village of Kyauk Taw.

Mu Kan Gyi was previously raided on June 24, when some 200 houses were destroyed by fire and one member of a resistance group was killed.

“I can understand when they capture and kill us, because we’re at war. But burning down entire villages doesn’t make any sense to me. It’s just irredeemably cruel,” said the resistance group leader.