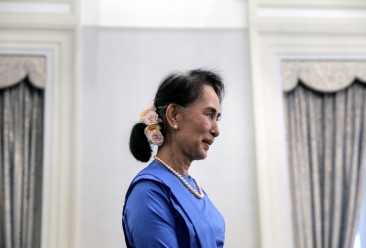 Months after the military overthrew her National League for Democracy (NLD) administration, the coup regime charged Suu Kyi with abusing her position as party leader to benefit a private foundation named after her mother, Daw Khin Kyi, as well as an affiliated project.

The junta claimed that the State Counsellor used her influence to enable the Daw Khin Kyi Foundation to lease land for its headquarters in Yangon’s Bahan Township at below-market rates, costing the country 5.2 billion kyat (US$3.16 million) in revenue.

A similar claim was made regarding the foundation’s purchase of land in Naypyitaw for the La Yaung Taw agriculture and vocational training school. The state lost more than 19 billion kyat ($11.5 million) through that transaction, the regime said.

The charges were laid out under Sections 55 and 63 of Myanmar’s Anti-Corruption Law, carrying a maximum prison sentence of 15 years. Suu Kyi pleaded not guilty on all counts.

Judge Myint San from the Mandalay Region high court delivered Monday’s verdicts against the deposed leader. They included a combined three-year prison term for three of the corruption charges related to the Daw Khin Kyi Foundation’s land purchase in Naypyitaw, and an additional three years’ incarceration for a fourth conviction concerning the foundation’s lease of land in Yangon.

Suu Kyi, who turned 77 in June, had been sentenced to 11 years’ imprisonment in December, January and April for six other convictions.

At the time of reporting, her total prison term was 17 years.

Nine more charges are still pending against the State Counsellor, including those regarding two more corruption allegations brought forward by businessman Maung Weik, the purchase of a helicopter for disaster management purposes, and alleged election fraud.

Suu Kyi has been arbitrarily detained in military custody since the February 1, 2021 coup. The junta transferred her from a previously unknown location to the Naypyitaw Detention Centre in July and has since imposed tight security around the site.

While it is not known exactly where the State Counsellor is being held within the compound, sources who regularly visit the location have described her quarters as being within a rudimentary 13-by-14-foot building on a fenced plot of land.