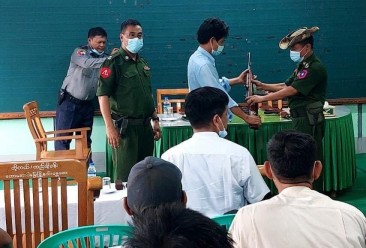 Myanmar junta chief Min Aung Hlaing vowed on Monday to redouble efforts to form a “public security system” of state-sponsored militia groups as a step towards holding elections next year.

In a 40-minute speech delivered on state media, the regime leader also announced a formal extension of the military’s hold on power—the second since it ousted the country’s elected civilian government in February of last year.

Blaming the delay in holding elections on instability caused by resistance to the military takeover, he said that the one-year state of emergency imposed after the coup would remain in place for another six months.

“Not to cause unfairness, threats and coercion in the coming election, it is necessary to cease armed conflicts. To be able to hold the election, we will accelerate the efforts for the public security system to soonest stabilise the politics and security of the nation,” he said in an official translation of the speech.

Since coming under attack in the wake of crackdowns on anti-coup protests last year, the military has increased its reliance on militias to wage offensives in anti-junta strongholds in Sagaing and Magway regions, as well as in other parts of the country that had previously been largely free of conflict.

Known locally as Pyu Saw Htee, the groups consist mostly of pro-military civilians, retired soldiers, and ultranationalists. They have most often been seen joining regular soldiers in raids on villages suspected of harbouring resistance groups.

According to leaked records, Myat Kyaw, the junta-appointed chief minister for Sagaing, said in a March meeting in Naypyitaw that the military had armed 77 such groups with more than 2,000 weapons in Sagaing alone.

On Saturday, local media in Mandalay reported that the military had released weapons, ammunition and uniforms to “public militias” in the city’s Maha Aungmyay Township, where urban guerrilla resistance groups remain strong. Those armed by the military included a ward administrator and members of Thwe Thout, a group accused of targeting political figures for murder.

In his speech, Min Aung Hlaing said that anti-regime groups had carried out 4,026 attacks in Sagaing since February of last year, while Yangon had 2,442 and Mandalay 2,194. He also claimed that 6,236 “terrorists” had been arrested under his rule.

Several ethnic armed groups, including the Kachin Independence Army, the Karen National Union, and the Karenni National Progressive Party, were also accused in the speech of contributing to the destabilisation of the country by supplying resistance groups with weapons and military training.

A so-called ‘public security system’ made up of pro-military civilians, soldiers and police will support the junta in their fight against the nationwide anti-coup resistance movement

Min Aung Hlaing also defended the regime’s imposition of martial law in 11 townships across the country, including six in Yangon Region, saying that the measure was necessary to restore the rule of law.

The junta chief also mentioned his plan to switch from the country’s current “first past the post” electoral system to one based on proportional representation. The change would make it easier for smaller parties to win parliamentary seats and therefore benefit the military’s proxy Union Solidarity and Development Party.

“It is necessary to take adequate time for the reform process. We have to implement such a system for ensuring the long-term existence of the state and ceasing the armed conflicts of ethnics,” said Min Aung Hlaing.

He also hinted that parliament would be allowed to convene so that provisions of the 2008 Constitution related to the electoral system can be amended.

One election monitoring source believes the junta wants to hold an election with PR ‘soon’, but there is little chance of a legitimate poll