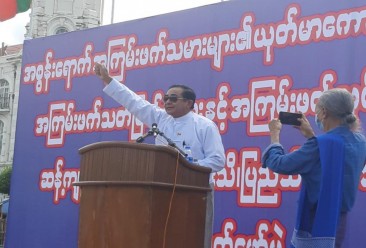 Hundreds of pro-army protesters gathered in downtown Yangon on Friday morning in a show of support for the Myanmar regime’s recent executions of four political prisoners.

The rally, which began at around 9am, took place in front of City Hall, near the central Yangon landmark of Sule Pagoda, amid a heavy military presence.

According to Myanmar Now’s sources, the protesters arrived in several trucks about an hour before the rally, after the area had been closed to other traffic.

Armed troops were seen positioned at the site of the protest, as well as in a number of nearby streets, both before and during the rally, residents said.

There were also reports that soldiers and police had been deployed along Maha Bandoola, Anawrahta, and Sule Pagoda roads, which all lead to the protest area, the night before.

The rally, which lasted about 50 minutes, was preceded by pro-army and nationalist songs and featured a speech by Hla Swe, a former MP from the military-proxy Union Solidarity and Development Party.

Posters denouncing the alleged crimes of the four men who were killed last weekend were also seen at the site.

The event comes three days after junta spokesperson Zaw Min Tun lashed out at criticism of the executions, saying they were justified by the “terrorist” acts of the four anti-junta activists who had been put to death.

The executions, which were the first in the country in more than three decades, met with national outrage and an international outcry over the junta’s escalating use of violence against its opponents.

Their executions were carried out over the weekend without the knowledge of their families, who were also denied permission to claim their bodies.

On Wednesday, the parents of Ko Jimmy and Phyo Zayar Thaw were harassed by pro-junta thugs, who threw rocks at their homes and hurled insults and death threats at them.