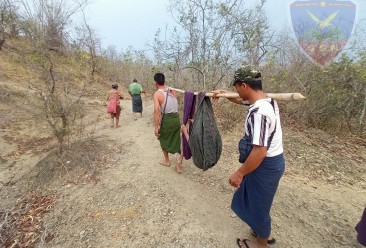 Regime forces mounted a major offensive last week to retake control of a dam in Magway Region’s Gangaw Township that had been captured by anti-junta groups active in the area.

In a series of attacks last Thursday, the military forced local resistance forces to retreat from the area around the Myittha dam, which is located near the village of Pyin Thar.

According to Hla Maung, a battalion commander with the Yaw Defence Force (YDF), the regime used MI-35 attack helicopters to carry out multiple assaults on resistance fighters stationed near the dam.

“They kept coming back to hit us again, even after we started clearing the area. There were four attacks in all,” he said.

A member of the Gangaw People’s Defence Force (PDF), another group targeted in the attacks, said that the helicopters were also used to transport troops into the area.

“We saw helicopters hovering over the dam and also heard that around 50 soldiers were dropped off,” he said, speaking on condition of anonymity.

Around 5,000 civilians from several villages near the dam also fled the attacks, according to local sources.

At least one PDF member is believed to have been killed during one of the airstrikes, but full casualty figures from the initial assault were not available.

However, it has been confirmed that at least four resistance fighters were killed in a clash that took place soon after junta troops arrived to take control of the dam.

According to Toe Maung, the information officer for the southern branch of the Gangaw PDF, members of the group used heavy weapons to attack the soldiers, but were unsuccessful in their efforts to repel them because they didn’t want to do structural damage to the dam.

“We have to do our best not to damage the dam’s structural integrity, but there is still going to be some damage,” he said.

Resistance forces had fought for nearly a year to capture the dam, which was completed in 2003.

A spokesperson for the YDF said that the group would do whatever it considers necessary to retake the dam, even if it means risking major damage.

“We have made preparations for what we will do if they don’t leave. However, we will do everything possible to minimize harm to the public,” he said.

He added that while the group would likely use explosives to target soldiers stationed around the dam, they would avoid blowing it up entirely.

“It would be bad for the people who live here if we blew up the entire Myittha dam while managing to kill only a few soldiers,” he said.

“However, if we have no other options, we might have to resort to that,” he added.