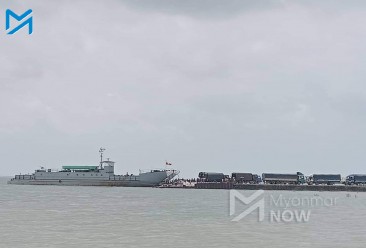 Myanmar’s military appears to be stepping up its activities in northern Rakhine State amid recent tensions with the Arakan Army (AA), according to residents.

On Monday, a military marine vessel was seen at the Ah Ngu Maw port in Rathedaung Township with a shipment of what was believed to be weapons and other military supplies.

Photos received by Myanmar Now show the boat’s cargo being loaded onto trucks for transport to an unknown location.

Two days earlier, a similar scene was witnessed in the state capital Sittwe, where two military cargo planes had arrived at the city’s airport in the morning.

“The first one came at around 9am and we heard that it was carrying a large amount of supplies, and the other one came at around 11am. They were both huge cargo aircraft,” said a source who watched as the contents of the planes were transferred to trucks that had been parked nearby.

“There were two or three trucks and 20 to 30 soldiers provided security,” the source said, speaking on condition of anonymity.

Meanwhile, there were also reports that the military has been conducting more thorough searches at checkpoints throughout the northern part of the state in recent days, including at almost every checkpoint along the Sittwe-Yangon highway.

Additional troops have also been stationed at the Sai Din bridge, which connects Buthidaung and Rathedaung townships, residents of the area said.

The bridge is currently open for use by civilians only from 7am to 5pm, according to a man who lives in the nearby village of Hpon Nyo Leik.

“They’re also checking motorcycle storage compartments and asking for ID cards, which they seldom did before. And there are now around 70 soldiers stationed there, not 40, as before,” said the man, who did not want to be identified.

Limiting access to the bridge, which is used regularly by residents of nine villages, has hampered the local economy, according to people living in the area.

“The situation is calm at the moment, but the military has sent more reinforcements. The tensions here between the two armed groups is making it more difficult for us to work,” said one local villager.

Rakhine State has been tense since last November, when the AA and the military clashed for the first time in a year. The two sides have exchanged fire on several occasions since then.

Earlier this month, a military spokesperson said the Myanmar army was “holding back” in the state in order to prevent unrest, days after the AA issued a warning that fighting could break out again at any time.

The military has also issued a curfew in southern Chin State’s Paletwa Township, across the border from Rakhine, following a clash with the AA on May 26.