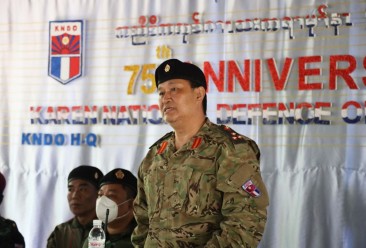 A commando column under the Karen National Defence Organisation (KNDO) announced the formation of the new Kawthoolei Army this week headed by its former leader Saw Nerdah Mya.

The Tuesday declaration by the commando unit, which joined the new armed group, followed the earlier removal of Saw Nerdah Mya from his role as KNDO commander-in-chief by the Karen National Union (KNU), which oversees the KNDO and the Karen National Liberation Army (KNLA) as its armed wings.

Saw Nerdah Mya, who was terminated from his role in January, was replaced in the interim by Brig-Gen Saw She Lay. The latter was formally granted the KNDO leadership position last week, at which time the organisation also commemorated its 75th anniversary.

Saw Nerdah Mya’s Kawthoolei Army will not be recognised by the KNU or the KNLA, according to statements issued by both institutions on Wednesday.

“His actions are no longer relevant to us,” the KNU’s statement said.

His decision to form a new armed group was in violation of a recent emergency meeting of KNDO and KNLA leaders and did not have the consent of their battalion commanders, the KNLA said in its own statement, urging its members to be “very cautious” in any dealings with the new group.

The KNU’s central committee explained that Saw Nerdah Mya violated several KNU regulations during his tenure as KNDO chief—which began in 2013—including a failure to follow military orders and the “illegal” raising of funds.

“From the time he started serving, he frequently violated the rules and responsibilities of the Supreme Headquarters of the KNLA and KNU, and he had to be corrected many times,” the committee said.

In June of last year, the Myanmar military accused around 30 KNDO troops under the leadership of Saw Nerdah Mya’s lieutenant Saw Ba Wah of murdering 25 construction workers who they had taken hostage; they were found dead with their hands tied behind their backs in the Waw Lay area of Karen State’s Myawaddy Township.

The KNDO claimed that the men were junta soldiers disguised as labourers; the military maintained that they were civilians.

The KNU’s central executive committee announced that they would investigate the allegations against the KNDO and suspended Saw Nerdah Mya from his commanding position, a decision which he rejected.

In January of this year, the KNU announced that both Saw Nerdah Mya and Saw Ba Wah had been removed from their posts.

“[Saw Nerdah Mya] failed to cooperate at the different stages [of the investigation] as a responsible and accountable leader and eventually defied the KNU’s judicial process,” the KNU’s central executive committee said in Wednesday’s statement. “These actions also halted the KNU’s process of bringing to justice those suspected of being involved in the extrajudicial killings of prisoners of war,” the committee concluded.

According to interviews with a local Karen-language radio program and with RFA, Saw Nerdah Mya said he plans to continue fighting the junta with his new armed force.

He claimed that it had become difficult to operate within the KNU’s structure, and that several members of the KNDO and the KNLA—as well as from breakaway groups the Democratic Karen Buddhist Army and the KNU/KNLA-Peace Council—had joined the Kawthoolei Army.

At the time of reporting, Myanmar Now was unable to verify Saw Nerdah Mya’s recent statements and was still trying to obtain comment from him regarding the establishment of the group.