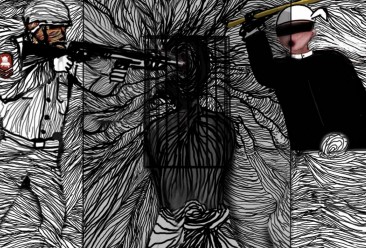 Myanmar’s junta has used “vile and brutal” tactics on detainees as part of its overall strategy to crush the country’s resistance movement, according to human rights group Amnesty International in a new report released on Tuesday.

The 19-page report, titled “15 Days Felt Like 15 Years,” is based on the group’s interviews with 15 people, including eight survivors of the military’s torture, and other research carried out in March.

In the report, Amnesty said that it found evidence of multiple human rights abuses, including violations of the right to freedom from torture or cruel, inhuman or degrading treatment, among the 10 incidents it examined.

The group also said that the military authorities “flout the law at every stage of the arrest and detention process”—from making arbitrary arrests to forcing confessions through torture or by threatening reprisals against relatives.

“Myanmar has stooped to unimaginable new lows in its vile and brutal treatment of detainees as part of an overall strategy intended to break their spirits and compel people to give up any resistance to the military coup last year,” Agnes Callamard, Amnesty’s secretary general, said in a press release for the report.

The report details some of the ways detainees are physically assaulted while undergoing interrogation, including beatings, electrical shocks, and having their genitals tasered. It also deals with the extreme mental pressures that prisoners face in regime custody.

“Detainees allege they were psychologically tortured with death and rape threats to force confessions or extract information about anti-coup activities,” the report said.

Interrogators also used humiliation to try to break their victims. One trans woman said that she was routinely mocked and sexually assaulted as part of her ordeal.

“During the interrogation, whenever I used feminine pronouns for myself, they said you are gay, so you must like this and exposed their male genitals in front of me,” she was quoted as saying in the report.

“[Her captors] also looked at messages with her doctor and asked if she had had a sex-change operation. They then took off her clothes, looked at her naked body and mocked her,” the report said.

In its report, Amnesty urged the junta to facilitate visits by the UN special envoy on Myanmar and its special rapporteur on human rights in the country, ensuing that they have access to all detention centres, including unofficial ones.

It also recommended that the shadow National Unity Government continue its efforts to seek justice and hold the junta accountable for its crimes under international law.

Foreign governments were also called on to exercise universal and other possible forms of jurisdiction to investigate and prosecute suspects involved in those crimes.

“The dire human rights situation in Myanmar is the direct result of a broader failure by the international community to hold the Myanmar military to account for its past crimes,” said Amnesty International.