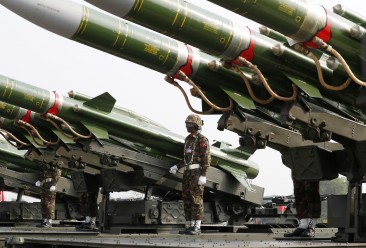 Myanmar’s military displays some of its firepower during a parade marking Armed Forces Day on March 27, 2022 (EPA-EFE/Nyein Chan Naing)

More than 100 companies—a third of them registered in Singapore—deserve closer scrutiny and stiffer sanctions for acting as arms brokers for Myanmar’s military, rights group Justice for Myanmar (JFM) said in a report released on Thursday.

According to the report, a total of 116 private companies have helped the country’s generals buy millions of dollars worth of weapons and other equipment, including 31 that have continued to do so since last year’s coup.

Most of the companies named in the report operate out of Myanmar. However, 38 are subsidiaries or associated companies of those businesses based in Singapore.

The tiny Southeast Asian island state has long played an outsized role as a “known financial and trade hub for the Myanmar military junta,” the report states, adding that this “poses an imminent threat to the lives of millions of Myanmar people.”

Urging the country to end its complicity in the junta’s crimes, the report calls on its government to ban the use of Singapore’s territory, financial institutions and ports for the supply of arms to the Myanmar military.

“As a member of the Association of Southeast Asian Nations (ASEAN), Singapore has an obligation to play an instrumental role to resolve the Myanmar crisis, as well as a moral responsibility to act,” said JFM in a press statement on Thursday.

The group also called on other countries to do more to stem the flow of weapons into Myanmar, where they are being used to commit atrocities against the country’s civilian population.

It proposes three categories of offenders that should be targeted for international sanctions: companies that have continued to procure weapons for the regime since the coup; companies that acted as arms dealers in the wake of the military’s genocidal attacks on the Rohingya in 2017; and companies known to have facilitated arms purchases in the past.

Those in the last category should be “monitored” to ensure that they are not still acting as arms brokers, while “companies, directors and shareholders” in the first two categories should be subject to strict international sanctions, the group says.

According to JFM, only a handful of companies linked to Myanmar’s military are currently being sanctioned by the US and other countries in the West. Many others continue to do business with the regime with impunity.

“JFM is calling for coordinated international sanctions on these companies and their directors and shareholders in order to stop the flow of arms and equipment to the military junta,” said JFM spokesperson Yadanar Maung.

“The time is well overdue for governments to take a decisive and coordinated response to the Myanmar military’s international crimes,” she added.

Rights group Justice for Myanmar urges the US, EU and UK to use their leverage to end Ukraine’s weapons deals with the junta

Bharat Electronics Limited has made multiple sales to the regime since February, according to Justice For Myanmar