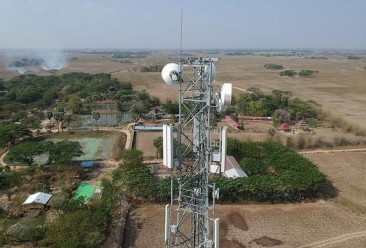 A Telenor telecommunications tower in Myanmar (not in Rakhine State) (Credit: Telenor)

A Rohingya refugee committee condemned a Norwegian government-appointed body on Tuesday for “improperly absolving” telecoms giant Telenor from responsibility in failing to prevent the weaponisation of their infrastructure in Rakhine State by the Myanmar military.

The incident, which allegedly resulted in more than 100 casualties, occurred during a military campaign against the minority for which genocide charges were later brought against Myanmar at the International Court of Justice.

Survivors who formed  the Committee Seeking Justice for Alethankyaw (CSJA) filed a complaint against Telenor in December 2019 with Norway’s National Contact Point (NCP) of the Organisation for Economic Co-operation and Development (OECD). The office is tasked with investigating grievances concerning a lack of compliance with responsible business standards.

CSJA argued that Telenor—which is majority-owned by the Norwegian state—had initially violated OECD guidelines by failing to carry out necessary due diligence before expanding into northern Rakhine State, and later by not pursuing its own probe into the Rohingya community’s allegations.

On Monday, the NCP’s panel of experts concluded that they had “not found that Telenor caused or contributed to the misuse of the mobile tower” in question.

They ruled that the “risk of misuse” of the site was “not reasonably foreseeable at the time.”

CSJA dismissed the position as “indefensible”, calling the NCP “a toothless lapdog unfit to seriously handle a case involving a Norwegian firm’s connections to war crimes.”

In its complaint, the committee pointed to UN findings published six months prior to the 2017 “clearance operations” that revealed how widespread human rights abuses, including murders and gang rapes, had been perpetrated by the military in Maungdaw in 2016.

Telenor, they said, would have been “well aware” of these incidents, noting that the company had subsequently withdrawn its own staff from Rakhine State.

When contacted by Myanmar Now regarding the NCP decision, Telenor did not offer further comment but restated its 2020 response to the CSJA complaint that the incident in Alethankyaw “should be investigated by the relevant authorities.”

Myanmar Now reported last November that the junta had continued to use telecoms infrastructure as tools of military violence, laying landmines at tower sites, including those leased by Telenor.

“Frode Elgesem’s comments are deeply insulting. These are survivors of a genocide,” a CSJA adviser said on Wednesday.

The NCP chair did note that the affected community had not been sufficiently consulted and that “the risks for the Rohingya were not prioritised in Telenor’s due diligence and stakeholder engagement.”

The Rohingya committee suggested that the NCP had also failed to engage with the community in question, pointing out that during its examination the office had not interviewed the survivors of the massacre or held a direct meeting with CSJA members.

CSJA’s adviser described Telenor’s due diligence practices as “totally inadequate” in Rakhine State, given that the Rohingya population around Alethankyaw would not have been able to participate in such assessments amid ongoing military repression.

“Stateless people subjected to apartheid cannot be included in a fair and transparent process when they themselves are violently oppressed,” the adviser told Myanmar Now. “The NCP refuses to acknowledge the very basic fact that the Rohingya could not take part in consultations that rely on free, prior and informed consent.”

Upon examination of Telenor’s own public statements during the period in question, CSJA said that the company appeared to have refrained from using the term “Rohingya” in order to placate the authorities. The group decried the move as a “desperate attempt to maintain operations in a country where anti-Rohingya sentiments were widespread amongst the military and government.”

When asked about this omission, Telenor did not offer a comment.

During the examination process with the NCP, Telenor reportedly described the company that owned and leased out the telecoms tower in question—Irrawaddy Green Towers (IGT)—as having “longstanding ties” to the community in Alethankyaw despite being founded in 2014. They later backtracked on the claim, according to CSJA, but insisted that the firm was “independent” and demonstrated a “commitment to responsible business.”

Myanmar Now has previously reported on IGT’s known links to the military; notorious Lebanese billionaire Najib Mikati’s M1 Group serves as a major shareholder in the company. IGT also received more than US$120m in loan funding arranged by a Dutch development bank and other “mezzanine lenders,” with the UK as the largest contributor with $50m.

Earlier this year, Telenor controversially exited Myanmar and sold its entire network—including the data of its 18m subscribers—for $105m to a Singapore-based joint venture set up by M1. Majority ownership was then handed to Myanmar military-linked firm Shwe Byain Phyu.

In July, the Netherlands-based Centre for Research on Multinational Corporations (SOMO) filed another formal complaint with the OECD on behalf of hundreds of Myanmar civil society organisations accusing Telenor of “irresponsible disengagement” from the country. Examination of the case is ongoing.

Following Monday’s conclusion to the CSJA complaint, the Rohingya survivors urged the Norwegian government to “fully reform” the NCP, and called on the country’s parliament to demand its own investigation into the allegations.

“The people of Alethankyaw deserve answers into what Telenor and IGT knew about the soldiers using a Telenor tower to fire at Rohingya villagers,” the group said. “As it stands, the NCP has done little but provide Telenor with a platform where it could continue to ignore its role and responsibility in one of the most shameful events in the firm’s history.”

In an official complaint, hundreds of Myanmar rights groups say Telenor’s handover to M1 Group fails to meet requirements of due diligence, stakeholder engagement and transparency

Telenor declares it will pull out of Myanmar and hand over its infrastructure to the M1 Group, a company on a UK advocacy group’s blacklist for its dealings with the military