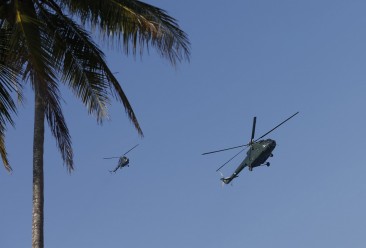 Myanmar’s civilian National Unity Government (NUG) has condemned the country’s military for holding at least 60 children hostage following a raid on a village in Sagaing Region’s Myinmu Township on Monday.

In a statement released on Tuesday, the NUG denounced the military’s actions and called on the international community to demand the safety and release of the children and other civilians being held in the village of Letpan Kyin.

“Ignoring the crimes committed by military terrorists encourages them to commit more crimes,” the NUG said in its statement.

According to resistance sources, the raid on Letpan Kyin began late Monday morning, when two helicopters launched an aerial assault as two more moved around 50 troops into the village.

Because of the timing of the attack, dozens of children and their teachers were gathered at the village’s NUG-run school and unable to flee, one source said.

“The airstrike happened during school hours, so about 60 children, as well as some teachers, were trapped there. Altogether, they took more than 100 civilians from the village hostage,” said Nway Oo, an officer in a local defence force.

The military released a statement on the day of the raid claiming that it had detained a total of 113 people—73 women and 40 men—in Letpan Kyin, but made no mention of the children.

It also said that it had mounted the attack based on information it had received about a planned meeting of local People’s Defence Force (PDF) groups in the village. According to the statement, five PDF members were killed in the raid.

Nway Oo denied this, however, saying that the casualties were local civilians, not members of any anti-regime resistance group.

“No PDF member was even injured. We did a roll-call and confirmed that no one was left behind. We’ve gotten in contact with everyone as well,” he said.

The capture of a large number of civilians has raised fears of a repeat of earlier massacres, including the killing of dozens of villagers in Sagaing’s Ye-U Township in May.

“It’s impossible not to worry about them as long as they are in the military’s hands. But all we can do is pray,” said a local woman who did not want to be identified.

Military attacks have forced hundreds of people from around a dozen villages in Myinmu Township to flee their homes, according to local sources.