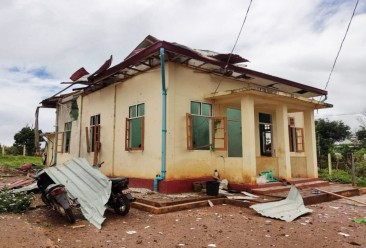 A man was killed in Karenni (Kayah) State’s Loikaw Township on Tuesday after the clinic where he was receiving treatment was hit by a Myanmar military airstrike, according to locals.

The victim, 60-year-old Thoe Reh, was at the clinic in the village of Daw Par Pa, east of the town of Loilin Lay, when it came under attack on Tuesday morning, residents said.

“I’m not sure if he was inside or outside of the clinic at the time,” a person living in the village told Myanmar Now, adding that there were no other casualties.

“They dropped so many bombs. The fighter jet passed over the area three times,” said the villager, who spoke on condition of anonymity.

According to a statement released by the Karenni Information Center, Thoe Reh was a resident of Daw Se, another village in the area.

Daw Par Pa is a village of around 300 households. Its population also includes people from other villages who have been displaced by the ongoing conflict in Karenni State.

According to another resident, the air raids on Tuesday also forced children studying at the village school to flee.

Myanmar’s junta has not released any comment on the incident.

This is not the first time that the regime’s forces have bombed a medical facility in the state. A number of other rural clinics have also come under attack, and in February, two hospitals were hit during raids in Demoso Township.

In November, a charity clinic run by Loikaw’s largest Catholic church was forced to close after junta troops raided it and arrested members of its medical staff.

According to a statement released by the Progressive Karenni People’s Force on August 1, the military has carried out a total of 157 airstrikes in Karenni State and southern Shan State’s Pekhon Township since last year’s coup.