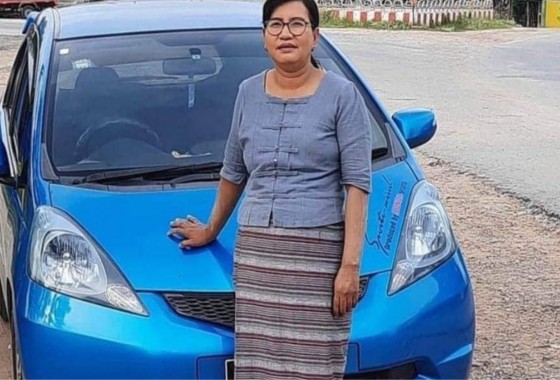 Myanmar’s shadow National Unity Government (NUG) has confirmed that it is investigating the death of a lawyer who was detained in Sagaing Region late last week by People’s Defence Force (PDF) troops under its command.

The lawyer, 50-year-old San San Yi, was reportedly returning to her home in Shwebo from a courthouse in Kanbalu last Thursday when her vehicle was intercepted by members of Kanbalu PDF Battalion 4.

She was then taken into custody for “questioning” along with her driver and another woman, but only the other two were released the following day, according to sources.

On Monday, her family filed a complaint with the NUG’s Northern Region Military Command, only to learn from a person close to resistance forces in the area that she was dead.

The person who informed San San Yi’s family of her death told Myanmar Now that he believed the lawyer died the day after her arrest.

“The supervisors of the local PDF groups didn’t even know that she had been killed. We only found out at around 10pm on December 5, from sources on the ground, that she was dead,” he said, speaking on condition of anonymity.

He added that he contacted Duwa Faw Yan Naw Taung, the Battalion 4 commander, who said he was away on the day of the incident, but would accept full responsibility for any wrongdoing under his command.

Myanmar Now was not able to reach Duwa Faw Yan Naw Taung for comment. However, another officer from the Kanbalu PDF’s supervisory office said that the case was being investigated and that those responsible would be held accountable.

“We will follow our procedures in this matter, as we always do,” said the PDF officer, who also did not want to be named.

Naing Htoo Aung, the secretary of the NUG’s defence ministry, also confirmed on Thursday that an investigation into San San Yi’s death was underway.

Meanwhile, there were also reports that junta troops questioned members of the lawyer’s family and seized their national identification cards and other documents after they filed their complaint with the NUG on Monday.

In their complaint, the family members stated that San San Yi was not a military informant and noted that she was representing several political prisoners in court. They added that her brother had been arrested for incitement following the February 2021 coup.

A Shwebo-based lawyer who has worked with San San Yi confirmed that she had no ties to the military.

“I personally knew her from the political cases we worked on. She didn’t have any affiliations with the military. I don’t know why the PDF did such a thing. Weren’t they supposed to do thorough research before actually killing somebody? This is unlawful and unjust,” said the lawyer.

The source who informed San San Yi’s family of her death said that it was essential for the NUG to address such issues fully and transparently in order to prevent their recurrence.

“Our revolution has basically just started, so it’s understandable that there would inevitably be mistakes. However, mistakes that are overlooked will lead to impunity. NUG officials must admit their mistakes when necessary. It won’t be good in the long run if they don’t compensate the families of the victims,” he said.

Kanbalu District is part of the NUG defence ministry’s Northern Region Military Command, one of three regional commands that it has established in the country.

The NUG has been investigating a number of cases involving PDF troops in recent months.

In Sagaing’s Wetlet Township, the leader of the Bo Tiger People’s Defence Force, a group that is not under the NUG’s command, accused the NUG-led Shwebo District PDF Battalion 2 of killing several of its members in a shootout in August.

On Monday, the NUG released a statement regarding the brutal killing of a young woman by PDF members in Sagaing’s Tamu Township.

The case came to light after a video of the woman being beaten and then shot in the back began circulating on social media earlier this month.

In its statement, the NUG called the killing “unacceptable” and said that a “severe penalty” would be imposed on the perpetrators if they are found guilty of violating the PDF’s code of conduct.