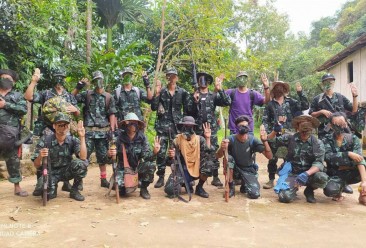 Simultaneous attacks were carried out against a police station and an army base in Mon State’s Thaton District on Tuesday, marking the first time that the Karen National Liberation Army (KNLA) had collaborated with resistance forces in the state.

The attacks targeted the central police station in Thein Zayat, a town on the Yangon-Mawlamyaing highway, and troops from Light Infantry Battalion (LIB) 207 stationed in the same area.

In a statement, one of the groups involved in the attacks, the Kyaikhto Revolutionary Force (KRF), said that an army sergeant named Than Aung from LIB 207 had been killed in the assault on the police station. No other casualties were reported.

A spokesperson for the KRF told Myanmar Now that there was only a brief exchange of fire after the hit-and-run attacks.

“I think we gave them a bit of a scare. All they could do was fire off a few random shots after we were already gone,” he added, noting that the families of police officers were also inside the police station compound.

The attacks took place in an area near where Battalion 3 of the KNLA, which is part of the armed group’s Brigade 1, is based. The LIB 207 base is also along the road that accesses KNLA territory that has seen major clashes in recent months.

“The military has been launching assaults and patrolling around the liberated areas on a regular basis. It has also increased its troop strength. But the only way it can get through is on this road,” the KRF spokesperson said.

Frequent but much smaller clashes have also broken out in parts of Kyaikto, Bilin and Thaton townships outside of territory controlled by the KNLA.

The following day, KNLA-led forces also ambushed a junta convoy near the village of Ingapo in Kyaikto Township as it was travelling on the Yangon-Mawlamyaing highway.

According to the KRF spokesperson, a retired army officer suspected of acting as a military informant was shot dead in Mote Pa Lin, another village in Kyaikto Township, on Tuesday.