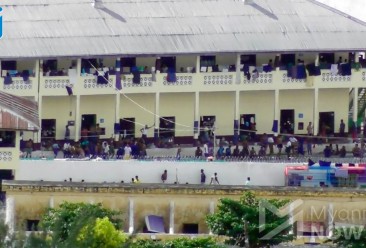 The interior of Obo Prison in Mandalay (Myanmar Now)

A student leader imprisoned last year for taking part in anti-coup protests has been handed an additional three years behind bars for staging a hunger strike, according to activist sources.

Naung Htet Aung, 26, who was arrested in Mandalay last November and later found guilty of incitement, received the sentence without trial on Wednesday, said a spokesperson for the All Burma Federation of Student Unions (ABFSU).

A day before the new sentence was handed down, Naung Htet Aung was brutally beaten and placed in solitary confinement, the ABFSU spokesperson told Myanmar Now.

“They beat him up and fired slingshots at him. We were told they also used tasers. According to our latest intel, he and 15 other political prisoners are still in solitary,” he said.

According to the spokesperson, Naung Htet Aung and the other hunger strikers sustained serious injuries in the crackdown.

“Three of his front teeth were knocked out and he also has wounds on his back. Some were even crippled by their injuries,” he said.

Naung Htet Aung is the former chair of the Yangon Education University Student Union. He was one of eight people arrested during a raid on a safehouse in Mandalay’s Chanayethazan Township last November.

The ABFSU also expressed grave concern about other student leaders who were taken into regime custody last year.

The group said that Aye Nandar Soe, the chair of the Sagaing Education University Students Union, disappeared last September after being arrested at a military checkpoint on a bridge linking Sagaing and Mandalay regions.

She was reportedly taken to an army compound where troops from Light Infantry Division 33 were stationed and has not been heard from since, according to the ABFSU.

More than 40 student union members are still being detained in prisons all over the country, the ABFSU said.