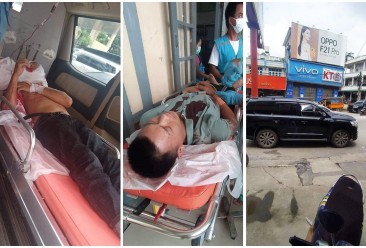 At least one person has been killed in a series of attacks carried out in the northern Shan State town of Muse since a Chinese-owned casino was raided there on Sunday.

Residents of the town, which is located on Myanmar’s border with China, said the victim was a 27-year-old woman who died when two men on a motorcycle threw grenades at a traffic intersection near the central market on Monday afternoon.

Later the same day, at around 9:30pm, two explosions were reported at the Mingalar Muse commercial complex, where the casino is located. There were no reports of injuries.

According to a Muse resident who asked not to be identified, there was also a shootout at the town’s central police station at around the same time.

“There was some gunfire at the police station not long after the explosions at Mingalar Muse. I don’t think anyone was injured,” said the source, who added that the shooting continued for about 30 minutes.

On Tuesday, two men were shot in their car while stopped at the same intersection as the previous day’s grenade incident. The unknown assailants were in the vehicle behind them, sources said.

Both men were taken to the hospital, but details of their conditions were not available at the time of reporting.

It was unclear who was responsible for the attacks, but residents said that criminal activity has spiked in the town since the military seized power last year.

The raid on Sunday was reportedly carried out under pressure from the Chinese government, which was said to be seeking to shut down a fraud ring believed to be operating from the casino.

Locals say that illegal activities at the casino have the tacit approval of the military authorities, and that army personnel and members of local militias are also involved in the operations of the gang, which has been accused of defrauding Chinese citizens through online scams.

They noted that while there were thousands of people present during the raid, only a handful of individuals were taken into custody.