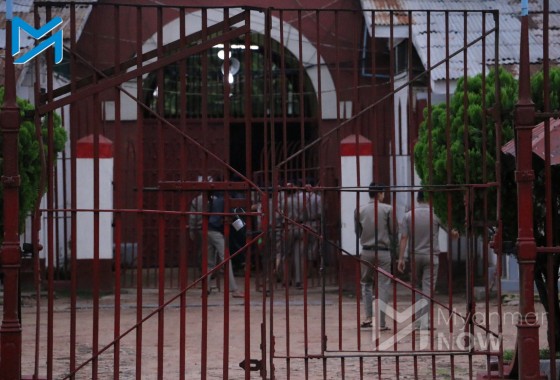 More than 80 Rohingya inmates being held in Yangon’s notorious Insein Prison have been singled out for abuse, including beatings and forced labour involving cleaning the latrine system, according to another political prisoner in the facility.

“They are getting beaten brutally. They are always either physically or verbally abused,” the inmate said in a recorded voice message sent to contacts outside of Insein and heard by Myanmar Now.

He explained in the recording that Insein’s prisoners were required to pay the authorities 45,000 kyat (US$21) per month to avoid being assigned “dirty work,” noting that the Rohingya Muslims were forced to clean human faeces if they failed to pay the bribe.

“They are being forced to pull the sewage from the septic tank with buckets and pour it on the crops. Some of them are also forced to stir the septic tanks using bamboo sticks all day,” the prisoner explained.

He claimed that more than 20 of the Rohingya youth detained there were suffering from such severe malnutrition that at the time of reporting, they were no longer able to walk, and that one had died in early December.

“This has been going on for too long now. They only give some injections to the ones who are in really bad condition. They only usually give paracetamol and rehydration salts to most people,” he said in the recording.

A former member of the All Burma Federation of Student Unions who was recently released from Insein Prison confirmed that inmates who were unable to pay bribes were regularly forced to do manual labour.

“They only make the people who have no money or privileges or ties to them do those dirty jobs, so it’s possible that it’s worse for the Rohingya people, as it’s easier for the authorities to get rid of the evidence if they end up killing them,” the student activist said.

On November 28, Radio Free Asia’s Burmese-language service reported that 54 men and 14 women of Rohingya ethnicity were arrested at a checkpoint in Yangon’s Hlegu Township while travelling inside a truck.

Some 20 more Rohingya people were arrested in Hlegu and Mingaladon townships in October.

The bodies of 13 Rohingya men and boys between the ages of 16 and 20 were found dumped on the side of a road in Hlegu in early December, according to a local junta official who spoke on the condition of anonymity.

The military council has not released any information responding to such reports.

Some 150 Rohingya men and women held in Taung Kalay Prison in the Karen State capital of Hpa-an, have been exposed to severe health problems due to a lack of food and other basic necessities, according to two former detainees who witnessed their neglect by prison authorities.

​​Most of the Rohingya being held in the prison were arrested while trying to escape the country by fleeing into neighbouring Thailand. As members of a Muslim minority that has been subjected to decades of discrimination inside Myanmar, many ultimately hoped to reach Malaysia.