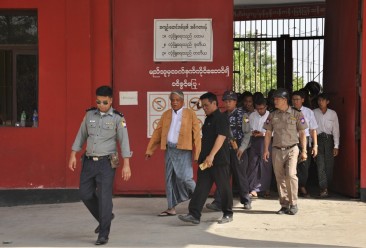 The junta transferred the ousted Sagaing Region chief minister from Monywa Prison in Sagaing to one 100 miles southwest in Myingyan—located in Mandalay Region—earlier this month, according to sources close to him.

Dr Myint Naing, appointed to his role under the National League for Democracy (NLD) government, was also a central executive committee member of the party. He was sentenced to 25 years in prison on July 27 after being convicted in a closed court trial of 10 criminal charges, seven of which were related to corruption. He has said that he will not file an appeal.

Days after the verdict, he requested that he be transferred from Monywa, in southern Sagaing, to a prison in Shwebo, his hometown, more than 60 miles north.

The request was denied, his wife Tint Tint said, and Myint Naing was instead sent to Myingyan Prison, even further from Shwebo, on August 2.

She noted that she was finding it difficult to visit her husband at the new detention site, due to the limited transportation to the area.

Tint Tint claimed that some 100 other political prisoners were moved along with Myint Naing from Monywa to Myingyan, but Myanmar Now was unable to confirm the statement.

The chief minister was detained soon after the February 1, 2021 coup, and charged in May last year along with four other members of the Sagaing regional cabinet.

Myint Naing previously served time in prison under the rule of Than Shwe after he took part in the 1988 pro-democracy movement.

The military council continues to sue and imprison NLD officials more than 18 months after the coup, as well as carry out arbitrary transfers of political prisoners nationwide.

Myanmar Now reported in July that the junta had moved multiple prisoners between detention sites including Daik-U and Thayawady prisons in Bago, Insein Prison in Yangon, Obo Prison in Mandalay and Kyaikmayaw Prison in Mon State, with family members of the inmates only learning of the transfers after they had taken place.