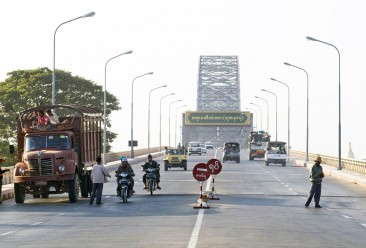 At least four people were killed on Wednesday after junta troops and members of a local defence force opened fire on each other on a bridge linking Mandalay and Sagaing regions.

The incident occurred as regime forces were inspecting a bus that was crossing the Yadanabon Bridge, located about 15km southwest of downtown Mandalay, at around 8:30am, local sources told Myanmar Now.

While the exact number of casualties was not known, civilians were believed to be among the dead and wounded.

“Several junta personnel were killed, but around 10 civilians also died. They were all taken away in ambulances,” said a local resident who spoke on condition of anonymity.

According to another source, three members of a People’s Defence Force (PDF) group were also killed.

“The military just let loose and started shooting. A lot of people on the bus were injured,” the source said.

At a press conference held later the same day, military spokesperson General Zaw Min Tun said that the shooting was started by three PDF members who were on the bus bound for the town of Sagaing.

He added that two of the three PDF fighters were killed and one was captured alive. He also accused them of using passengers as human shields and blamed them for the deaths of two civilians.

In a statement released shortly after the incident, the regime said that a nine-year-old girl was among those who were shot.

The bridge, which spans the Ayeyarwady River, was closed for about 30 minutes after the shootout, according to a source who lives in the area.

“They also washed the blood off of the bus and tightened security around the bridge,” the source said, adding that searches were also being carried out along the Sagaing Hills, as far north as Mingun Township.

Myanmar Now attempted to contact junta officials and police in Sagaing for further information, but all calls went unanswered.