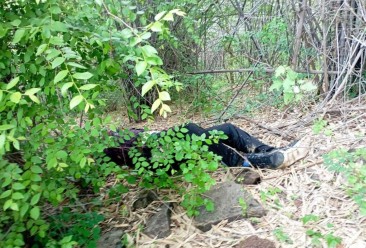 The bodies of six civilians who were captured by regime forces earlier this month were discovered near a village in Magway Region’s Myaing Township last week.

The victims, who were among 40 villagers taken hostage and used as human shields by soldiers who began advancing through the area on May 13, were found last Thursday, according to the commander of a local People’s Defence Force (PDF) battalion.

All six bodies were found near each other on the edge of a forest a short distance north of the village of Kyauk Khwet, in southern Myaing Township, Lt Let Ya of the Myaing PDF told Myanmar Now.

“Six of the villagers who were being held as hostages are dead. The junta troop captured the elderly and others who could not run,” he said.

“We often attack troops with explosives, so that’s why they took the villagers prisoner,” he added.

Each of the dead villagers showed signs of physical abuse, including broken bones, and all had been shot at close range, according to Let Ya.

“There were gunshot wounds to their ears, and some had been shot in the mouth,” he said.

The victims, who were all men between the ages of 25 and 50, are believed to be from the villages of Than Chaung, Kyauk Khwet, Bawton and Baunt Bin, all located along the border between Myaing and Pauk townships.

Only one victim, 25-year-old Kyauk Khwet resident Kyaw Ye, could be positively identified by name.

He was found lying face up with bullet wounds to the head and thigh, according to Let Ya. He also had a lit cigarette held lightly between his lips, the PDF commander added.

A military column of around 170 regime troops has been been moving through southern Myaing Township since the middle of the month. According to residents, thousands have fled their homes to avoid capture by the junta forces.

On May 14 and 15, soldiers also fired on the villages of Letyatma and Padauk Kan, in the northern part of the township, with heavy artillery and light weapons. Hundreds of homes were set on fire, and at least three villagers were shot dead in the raids, local sources reported.

Myanmar’s junta routinely denies targeting civilians in its offensives against anti-regime resistance forces, despite numerous reports of such attacks.

As in other conflict areas, the regime has severed most telephone and internet connections to much of Myaing Township.