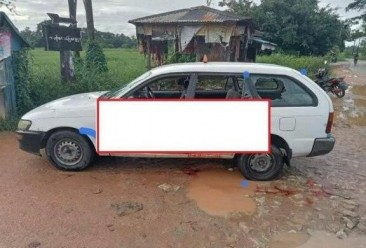 Four regime-appointed administrators and an alleged military informant were shot dead by an urban guerrilla group in Yangon Region’s Twante Township on Monday.

According to a spokesperson for the group that claimed responsibility for the attack, the driver of the vehicle that the four administrators were riding in was also killed.

A fifth administrator survived the attack, which took place near the village of Zee Phyu Khone on Monday afternoon, he added.

The victims were identified as village administrator Khin Nyunt, 100-household administrators Aye Myint, Win Zaw, and Than Htay, and alleged informant Bo Bo, who was travelling with the group on a motorbike.

The name of the driver was not available at the time of reporting.

The spokesperson said that the Twante-based guerrilla group had received information from an inside source about a planned meeting of the five administrators, including the route that they would be taking back to the village after it was over.

They were also informed that Bo Bo, who was said to be “helping the regime’s administration,” would be present at the meeting, he added.

There have been 30 junta troops stationed in Zee Phyu Kone since last year, when they reportedly rampaged through the village during a crackdown on anti-coup protests.

The guerrilla group accused the administrators of helping the military to arrest protesters by informing on them to junta authorities. They have also been involved in sealing the homes of protest leaders, the group’s spokesperson said.

Myanmar’s military authorities did not respond to Myanmar Now’s requests for comment on the incident.

Meanwhile, there was also an attack on Yangon’s Insein Prison at around 4am on Monday, according to a police source. At least one staff member was injured when unknown assailants fired a 40mm grenade launcher at the prison, the source said.

These incidents come just days after two alleged informants were killed in Twante and Thanlyin townships over the weekend. A 100-household administrator from Yangon’s North Okkalapa Township was also shot on Saturday, but survived the attack.

There have also been a number of explosions in the city in recent days. According to a member of the Yangon Urban Guerrillas Association, a junta court and an electricity office in East Dagon Township were among the targets.

More than a year and a half after the February 2021 coup, resistance forces in Myanmar’s urban centres continue to carry out assassinations against soldiers, administrators, and others accused of helping to prop up the regime.

In a speech delivered on August 1, junta leader Min Aung Hlaing said that there have been more than 2,000 such incidents in Yangon alone since the coup.