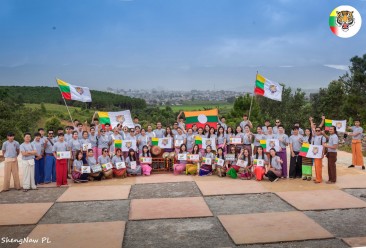 The Shan Nationalities League for Democracy (SNLD) announced on Thursday that they would hold a major conference on Thursday and Friday in the Shan State capital of Taunggyi to re-elect party leadership, the current chair said.

The conference follows a February threat by the military council to suspend the prominent ethnic political party’s activities for three years for their failure to follow budgetary guidelines issued by the junta-controlled Union Election Commission (UEC).

A party audit was to follow, but was postponed until the end of June, and the military reportedly gave the SNLD permission to hold their upcoming meeting.

“There’s basically nothing that the political parties can do [under the military regime],” SNLD chairperson Sai Nyunt Lwin told Myanmar Now. “The date for the audit is in June, so it’s the perfect time for us to hold a conference now. I also don’t think the UEC will trouble us.”

The conference comes one month after the death of the 78-year-old party founder and former chairperson Khun Htun Oo.

The SNLD is the first political party to convene in this way since Myanmar’s February 2021 military coup.

“We had to take a lot of risks to do this as we don’t know what dangers await us, but this is something that must be done,” Sai Nyunt Lwin said.

The SNLD was founded in 1988 and has long advocated for the removal of the military from politics and the establishment of a federal union in Myanmar. Party policy requires that a conference be held every three years to conduct internal elections. It has between 40,000 and 50,000 members nationwide, according to Sai Nyunt Lwin.

The results were annulled by the military in their attempted seizure of power.