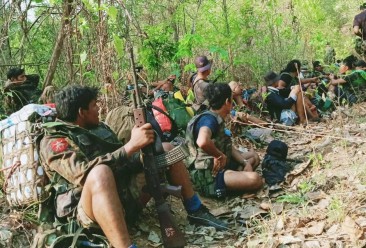 A Myanmar army column of around 100 troops set fire to an estimated 20 houses in a Pakokku Township village on Monday morning, according to local sources.

A fighter in a local anti-junta defence force who had been monitoring the military’s movements from afar told Myanmar Now that 30 soldiers arrived in the village of Sar Kyin at around 8am that day. Seventy more troops came in a convoy of three vehicles and one motorcycle from Myit Chay—a village 8km to the southeast—later that morning.

“Two of the houses were lost in the fire but the flames went out shortly afterward, as it was raining,” he explained. “The soldiers waited until the rain stopped and then torched more houses.”

Sar Kyin, located in Magway Region, has a total of 168 households, the residents of which had already fled prior to the attack.

“The villagers are still living in the forest and they don’t dare to go back to the village. As of now, they’re running out of food,” a local man said.

Since April, the military has torched six villages along the Yaw stream, which separates Pakokku and neighbouring Seikphyu Township: Shar Du, De Pyar, Myit Phyar, Taung Palu, Hseng Phyu and East Kan Phyu. In these attacks, more than 400 residences—home to 700 people—were destroyed, according to data collected by the local defence force.

Nearly 19,000 homes have been burned down by the military nationwide since the February 2021 coup, according to monitoring group Data for Myanmar.

The military has denied responsibility for the attacks, instead blaming resistance forces for the acts.

The pattern has earned the junta’s forces the name “army of arson” by the public.