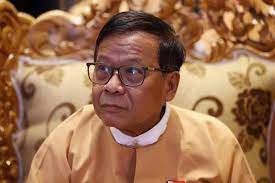 The charges come a week after the military council announced that it would prosecute 16 NLD leaders for election fraud.

One charge was filed against him in the Amarapura Township court under Section 171f of the Penal Code for allegedly preventing eight people from voting. The section provides for a one-year prison sentence for “undue influence” or “personation during an election.”

Another case was filed in Aungmyay Thazan Township for voter fraud in violation of Penal Code Section 130a, which carries a maximum sentence of three years in prison.

“Amarapura was the constituency of Dr Zaw Myint Maung. They accused him of obstructing the voting rights of eight residents of that constituency,” a lawyer told Myanmar Now, adding that the case in Aungmyay Thazan may have been targeted at him due to his position in the regional cabinet.

On November 16, the military council announced via state media that they had “prosecuted” detained State Counsellor Aung San Suu Kyi, President Win Myint, and 14 other members of the defunct National League for Democracy (NLD) government, including Zaw Myint Maung, for election fraud.

According to the junta’s announcement, legal complaints against the defendants were filed on November 15 in various courts throughout the country, but the specific charges were not specified—only that they fell under “existing laws and parliamentary election laws.”

Since the coup, Zaw Myint Maung has been detained in Mandalay’s Obo Prison. He faces five corruption charges, as well as lawsuits alleging violations of Section 505b of the Penal Code, which prohibits incitement, and the Disaster Management Law.

The Aungmyay Thazan Township court is currently hearing his incitement and Disaster Management Law charges, with defense witnesses being examined at the time of reporting.

According to reports, the corruption charges are still being investigated.

On February 1, the Myanmar military staged a coup, claiming that the NLD committed voter fraud during last year’s general election, which was marred by the Covid-19 pandemic. Despite reports from local and international election observers that the electoral outcome—in which the NLD won a majority of votes—was valid, the junta’s new election commission annulled and reversed the results in July.

The military council immediately began charging NLD leaders under Section 505b and has been adding corruption and electoral fraud charges to their cases.