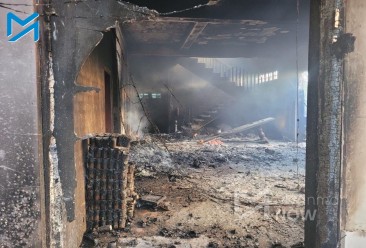 The remains of 18 people, including the body of a 10-year-old girl, were found in a village in Myanmar’s heartland this week following three days of occupation by the military, according to locals and members of resistance groups active in the area.

In one of the most violent and prolonged assaults by the junta’s forces in recent days, regime troops besieged the village of Yin Paung Taing in southern Sagaing Region’s Yinmabin Township on Thursday afternoon. The attack started with the launch of airstrikes from three Mi-35 fighter jets and continued as some 60 soldiers were dropped from three helicopters to carry out a ground offensive, stationing themselves in a village monastery until Sunday morning, residents told Myanmar Now.

Locals and resistance fighters who returned to Yin Paung Taing after the troops had left initially found the bodies of 12 slain civilians, all of whom they were able to identify. As the search for casualties continued on Monday, six more people were found dead, and at the time of reporting, their identities were not confirmed.

Nine of the first 12 bodies had wounds that appeared to have been caused by light and heavy weaponry, according to a 40-year-old man who was involved in the search for his neighbours.

Among the victims were two children: 10-year-old Khine Khine Win and 17-year-old Thaw Bhone Naing. There were also five men between the ages of 24 and 73, and two women, aged 45 and 52. Six of the 18 people who were killed—including Khine Khine Win—had suffered burns.

Two other elderly women, both aged 85, are believed to have died of starvation as they hid in the village during the raid.

A 67-year-old man also died from respiratory issues while fleeing the junta attack, the local man who spoke to Myanmar Now said.

By the time that many of the bodies were found, they had decomposed to the point where they could not be moved and had to be cremated on-site.

“They must have been dead since August 11, so it was impossible to pick up their bodies,” the man recalled. “Even cows, dogs and horses were shot by artillery. The whole village was torn down.”

“The village felt like a cemetery and the smell of rotten flesh was everywhere,” he said.

Yin Paung Taing, which has a population of nearly 3,000, is located 10 miles south of the town of Yinmabin. The three fighter jets which launched the airstrikes on the village came from Monywa, a city around 35 miles east of Yin Paung Taing across the Chindwin River, and where the junta’s Northwestern Military Command is located.

On the day of the assault, a market fair had been taking place in the village, drawing crowds and making it difficult for those present to immediately flee the air attacks, according to one man who managed to flee to safety.

“One helicopter dropped off soldiers at the entrance of the village and the other two hovered around the village and relentlessly fired from the left and the right. Some people escaped. Some didn’t,” he said.

The man recalled that the military aircraft appeared soon after around 80 resistance fighters travelling from neighbouring Chin State had stopped at the village to rest on the afternoon of August 11. He speculated that the Myanmar army had received intel regarding the guerrilla force’s movements and that its members had likely been the target of the attack.

“The jets hovered around the place where members of that group were having lunch and they opened fire on that area, so I think someone must have informed the military that they would be here,” he explained.

He told Myanmar Now that he narrowly escaped the air assault on Thursday afternoon with his wife, teenage daughter and young son. He described how he carried the boy—a toddler—in one arm and held his wife’s hand with the other as they ran upon hearing the sound of incoming jets.

“I held up my son tightly and covered him with my body so that he would not get shot,” he said, adding that the family had no time to gather any belongings.

He left his son and wife under a tree outside the village and returned to locate his daughter and bring her to safety.

Those who remained trapped in Yin Paung Taing during the raid were among the community’s most vulnerable residents, including the sick and elderly, many of whom were injured in the siege and held hostage by the military.

Bala, a member of the Yinmabin-based Young Ranger Force, said that fighters from at least 10 local resistance groups—including his—tried to rescue as many civilians as possible, but were overwhelmed by the number of wounded.

“Some of the people were hit by the fragments of walls and windows that had been blasted apart by the shells dropped from the jets,” he explained. “Some had their legs broken and some were even hit right in the head with the shells. We were able to rescue some of them but we had to leave some behind out of desperation.”

He said that the members of the resistance coalition managed to guide the Chin fighters to safety before the junta troops airlifted into Yin Paung Taing had set up posts and began firing artillery into the surrounding area.

On the following day, August 12, the local defence forces attacked the occupying military column, which responded with airstrikes. Resistance fighters turned their fire to the junta aircrafts hovering over the area.

When the Myanmar army soldiers left Yin Paung Taing at around 6am on Sunday, they released the women and elderly residents who they had held captive, but took 24 men with them as hostages.

As the troops—accompanied by some 70 pro-junta militia members—headed west, a fighter jet fired at villages in their path to “clear” the area in preparation for the military column’s departure, according to members of local defence forces. Hundreds of residents reportedly fled from the communities of Pu Htoe Thar and Mon Thwin, both located along the road travelled by the junta forces.

By Tuesday, the column had arrived in the village of Chin Pyit, less than 10 miles from Yin Paung Taing and located in neighbouring Pale Township. There they torched multiple homes, according to locals.

At the time of reporting, it was not known if the hostages from Yin Paung Taing were still alive.

Displaced residents largely returned to Yin Paung Taing on Monday, noting that the destruction of the village was extensive, and included severe damage to the Buddhist community hall.

At least 15 motorcycles and one truck, as well as two vehicle repair garages, were also destroyed.

Yin Paung Taing was first raided in September of last year in an attack that left one civilian dead and seven beaten and tortured, according to the 40-year-old resident who recounted the most recent assault to Myanmar Now.

The military has carried out frequent aerial attacks on multiple Sagaing Region resistance strongholds, including the townships of Ayadaw, Depayin, Myinmu and Ye-U.

Bala, from the Young Ranger Force, explained that although resistance groups have often been able to fend off ground offensives by the Myanmar army, they continue to struggle when confronted with air power.

“We are not afraid to face them on the ground but we still have to flee when they launch airstrikes,” he said. “The jets flew so low while shooting at us. At least if we had anti-aircraft weapons we could fire back.”

Dozens of villagers, including many injured by helicopter gunfire, are unable to escape their Sagaing Region community as soldiers airlifted to the area occupy the site