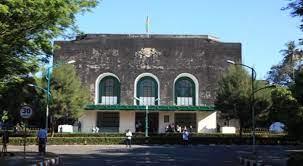 On November 29, Chancellor Road at the University of Yangon was packed with alumni and members of the public gathered to commemorate the university’s centennial. The university, founded in December 1920, has survived numerous political upheavals as well as numerous social, technological, and cultural transformations.

City dwellers were inside the campus, their feet moving from one famous location to the next. Some paid tribute to the century-old Thitpok tree, affectionately known as “the old bachelor,” the Judson Church, the Kantgaw forest, and Convocation Hall. Numerous former students also paid visits to the university’s dormitories, which were the sites of numerous dreams and love affairs.

The university officially celebrated its centennial anniversary in January with a concert, film competition, photo exhibition, and other campus-based events.

The campus reopened its doors to the public in the final week of November, inviting visitors to celebrate – six feet apart and wearing masks. On November 29, which also happens to be Tazaungmon’s full moon day, thousands of visitors came to see the moon shining over the campus.

After dozens of complaints on social media about the size of the crowds on campus, the Ministry of Education urged people to stay at home. The official celebration, which will take place on December 1, will now take place virtually. Myanmar Radio and Television will cover the event (MRTV). The celebrations will also be streamed live on the University of Yangon’s Facebook page.

Meanwhile, a group of alumni will pay their respects to the century-old institution by walking around the perimeter of campus on December 1 in the early morning.