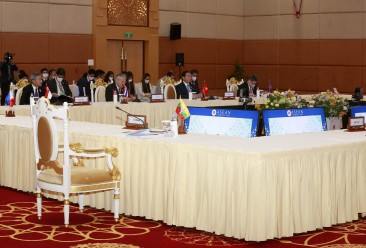 In the year and a half since Myanmar’s military plunged the country into crisis by seizing power in an illegal coup, the international response has been remarkably muted. Rather than become more directly involved in resolving this ongoing catastrophe, the United Nations, the United States and its allies, and even China have allowed the Association of Southeast Asian Nations (ASEAN) to take the lead in addressing the situation in Myanmar. However, most close observers say that ASEAN’s only initiative to date, the so-called five-point consensus, or 5PC, has been dead in the water since it was formulated in April of last year.

To learn more about the limits of this approach and the failure of the international community to take a more proactive stance, Myanmar Now spoke recently to Prof. Zachary Abuza, a professor at the National War College in Washington, D.C. who focuses on Southeast Asian politics and security issues.

In this interview, Prof. Abuza discusses the shortcomings of efforts to engage the State Administrative Council (SAC), as the new junta calls itself, and the civilian National Unity Government (NUG), formed by elected lawmakers ousted by last year’s coup. He also points to ways the NUG can win support for its efforts to achieve its long-term goal of establishing a federal democratic system in Myanmar.

Myanmar Now: What is your assessment of ASEAN’s five-point consensus as a way of addressing the crisis in Myanmar?

Prof. Abuza: The international community has clearly failed the people of Myanmar by letting the five-point consensus serve as the foundation for engaging the SAC. It allowed the international community to follow ASEAN’s lead, whether or not it succeeded. This of course was a dreadful mistake, because the SAC signed the 5PC without ever having any intention of really implementing it. The junta assumed that the Civil Disobedience Movement would lose steam and that the NUG would be unable to sustain military operations, and thus they could half-heartedly implement parts of the five-point agenda, to at least sufficiently keep ASEAN satisfied.

Likewise, the ASEAN calculus was that the coup d’etat would be a fait accompli and that they would simply have to live with the result. When that didn’t happen, the junta assumed that ASEAN would eventually come down on their traditional side of non-interference and consensus decision making, especially under Cambodia’s leadership this year. And at this point the SAC has all but stated that ASEAN has no business calling for the 5PC to be implemented.

Does ASEAN really have the power to address the crisis in Myanmar? If not, why did the international community leave it to ASEAN to address it alone?

ASEAN has no power to address the crisis in Myanmar. Structurally, ASEAN’s consensus-based decision-making, rotational leadership, and firm policy of non-interference ensure that it will remain weak and ineffective. No country has put a financial cost on the junta, though this is changing with Singapore. It’s not that they are completely ineffective—remember ASEAN’s finding that the junta had not met any benchmarks in implementing the 5PC was justification to get Min Aung Hlaing disinvited from the summit, a huge snub. Yet, the junta has also benefited from the fact that they are absolutely shameless and are willing to go it alone.

The international community, including the US, the EU, Japan, and others, were largely happy to let ASEAN take the lead on an ASEAN problem. But again, they had no other real policy for when ASEAN’s initiative failed, as it was almost certain to do. And that makes the international response look weak and disjointed.

Is this, then, a matter that should be handled by the United Nations Security Council (UNSC), which has the power to take action on a member state if it is a threat to international and regional peace and stability?

No, the UNSC will not be a conducive body, because the Russians and Chinese will use their vetoes to ensure that there are no actions against Min Aung Hlaing’s despotic regime, including bans on arm sales.

Myanmar’s Spring Revolution is not about going back to the pre-coup situation, but going forward to the establishment of a new federal democratic system that reflects the genuine aspirations of the people of Myanmar. Do you think the international community has largely failed to appreciate what the NUG is trying to achieve?

The NUG have laid out the only viable path forward for a country that has been at war with itself since its founding. The only viable solution for Myanmar is a federal democratic system, with considerable regional political and economic autonomy. This clearly is the aspiration of the public. And I don’t want to downplay the challenges that the NUG face in getting there; but it is a positive vision that would do more than any other solution presented in the past to achieving a degree of peace and human security.

The SAC’s vision for Myanmar, economically, politically and culturally, is a 60-year regression that no one but the generals aspire to. Their vision of Myanmar’s future is a military-controlled political system (largely based on the Thai model implemented after 2014), with continued divide-and-rule tactics employed against the EROs [ethnic revolutionary organisations] and a sufficient amount of war for the military to justify its political stranglehold for the sake of holding the country together.

I think one of the problems for Myanmar is that the country is just so complex that it gives the United States and others a reason to not get involved. For example, it’s not as simple as there being a single organisation representing the interests of the minorities in the border regions; there are always a multiplicity of actors, with competing interests and visions.

The US policy towards the EROs, in particular, needs to be revisited. The US policy of non-recognition is based on the fact that some, mainly Shan State actors, are deeply involved in the production and trafficking of vast quantities of illicit narcotics. Not all EROs are, but unfortunately the complexity and fluidity of the situation allows the US and others to seek the easy way out and not engage. This is completely short-sighted, as the EROs will have played a key role in the Spring Revolution and will have a seat at the table in a post-junta Myanmar.

Why have the US and its allies been reluctant to recognise and fully engage with the NUG as the legitimate government and representative of the people of Myanmar?

This has been enormously frustrating to me. The US government states that the NUG is the lawful representative of the people of Myanmar and that the SAC illegally usurped power from a democratically elected government, and yet it still will not give the NUG official recognition, though it has taken more action on the SAC than most other key states. The US does engage the NUG at high levels, yet it continues to withhold formal diplomatic recognition.

In my personal opinion there are a number of things the United States can and should do immediately. These include formally recognising the NUG. It’s laughable to think that the SAC has any interest, in its current form, in seeking a negotiated settlement to the crisis. So why continue to engage them at the diplomatic level we are?

The US has frozen $1 billion in Myanmar’s assets; it should allow the NUG to borrow against that or use those funds as the basis of their central bank. The US should impose a new round of sanctions that targets the financial lifelines of the junta, including the Myanma Oil and Gas Enterprise and some key banks. The economy is truly the junta’s Achilles’ heel, and the US must lead a concerted effort to cripple it economically.

While many call for the US provision of lethal assistance to the NUG, that is highly unlikely. While I personally think it is justified, calls for it may lead to false hope on the part of the people of Myanmar. But there is still much in the way of non-lethal assistance that the US can and should provide. Sadly, I do not see the high-level engagement of the US leadership to make those decisions and build up international support for them. Sadly, much of US policy right now was dictated by the 2022 National Defense Authorization Act (NDAA), which is an act of Congress. The 2023 NDAA could see Congress apply more leverage on the Biden administration.

To fulfil its role as a force for stability in the region, ASEAN must act boldly to restore balance in Myanmar

What can advocates of Myanmar’s Spring Revolution do to gain the kind of international attention and practical support that the war in Ukraine has attracted?

Myanmar is largely a domestic issue, one that will never rise to the same level, as a threat to international law and a rules-based order, as that currently being posed to European security by a nuclear-armed rogue state. I don’t think there is a lot that the NUG leadership can do to raise their profile in the eyes of a distracted international community. But they shouldn’t lose hope, because after more than 18 months since the coup, the SAC has no path to victory.

So, here’s what the NUG leadership has to do: First, consolidate their gains. Together with the EROs, they control 45 to 50 percent of the country. They need to step up civil administration and prove themselves to be a viable alternative, based on a democratic federal republic.

Second, while the military offensive against the junta’s forces has gone better than many expected and led to the gradual hollowing out of military forces, the SAC’s key vulnerability is their absolute economic incompetence. They have driven the economy to the point of collapse. The NUG must initiate a multi-faceted economic offensive to bankrupt the regime.

Third, they need to build on the outrage within ASEAN over the execution of Ko Jimmy, Phyo Zeya Thaw, and the other two. ASEAN can’t be allowed to go back to their default positions. The NUG must take advantage of growing unease within ASEAN over the flood of refugees, and illicit narcotics, that are changing attitudes in ASEAN capitals.

Finally, the NUG must continue to juxtapose themselves against the rapacious, corrupt, brutal, and incompetent SAC. Their government must continue to extol democratic values, transparency, competence, and ethical leadership that is committed to public service. They have done a superb job to date, but must continue to develop their positive and progressive vision of the country.

The views expressed here are those of Prof. Zachary Abuza alone and do not reflect the opinions of the National War College, the United States Department of Defense, or the government of the United States.

In a statement, the shadow government also offered to make its own recommendations for a ‘non-political’ representative