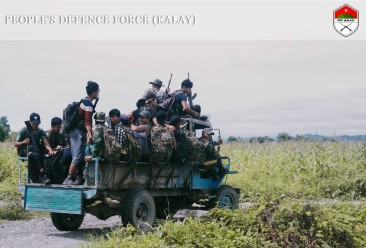 Fighting between the military and anti-junta defence forces has been ongoing in Sagaing Region’s southern Kalay Township, sources in the resistance said.

A Myanmar army column of around 200 troops occupying Kalay Technological University trespassed into territory controlled by the Kalay People’s Defence Force (PDF), prompting the guerrilla group and its allies to attack the soldiers on Tuesday.

The assault reportedly caused multiple casualties on the military’s side, prompting the column to set up a base in Thayakone village that afternoon.

Resistance forces again struck the unit on Wednesday and Thursday, leading to episodes of fighting that lasted all day and left some 20 junta soldiers dead, they said.

Myanmar Now is unable to independently verify the number of casualties on the military’s side.

Troops from the Myanmar army’s Regional Operations Command in Kalay stationed themselves at the Technological University’s campus two miles away and provided support for the soldiers in Thayakone by firing heavily artillery in the direction of the battlefield, according to members of the local PDF.

Three resistance fighters were killed and 17 more injured by the heavy weapons. Among the casualties was Wai Min Thaw, a 19-year-old squadron leader within the Kalay PDF’s Battalion 6.

“They kept firing heavy artillery shells and we were only armed with handmade mortars, so we suffered multiple casualties,” Japan Gyi, the spokesperson for Wai Min Thaw’s battalion, told Myanmar Now.

Kalay is located in western Sagaing Region and borders Chin State; resistance forces are heavily concentrated in the southern part of the township, where the military has focused its recent movements and assaults.

“They wanted to set up a station in Htauk Kyant but we didn’t let them,” Nay Thit, the spokesperson for the Kalay PDF’s first battalion, said on Friday, referring to another Kalay Township village. “We have been relentlessly attacking them since they left their base, but we have very limited weapons and ammunition. No matter what, we are still going to try our best.”

The shortage of arms and bullets remains a major challenge among resistance forces, who rely on guerrilla tactics and are typically outgunned by the junta’s military.

“I don’t care how tired I am, I will continue fighting until my last breath,” Nay Thit continued. “However, when we run out of ammunition, we have no option left but to retreat. We are desperately needing more support for ammunition for the defence forces.”

Resistance groups used improvised explosive devices to ambush a junta column in northern Kalay on Thursday, causing several casualties, according to a statement published that day by the Kalay PDF.

However, the military reportedly responded by firing heavy artillery at another nearby village, resulting in further clashes with defence forces.

Locals said they heard shells being fired from within Kalay town on Friday morning, but further information was not available at the time of reporting.

Resistance forces active in the area released a statement warning the public not to use the road connecting Kalay with Gangaw in Magway Region due to the ongoing fighting.

In a February 1 report, the Kalay PDF claimed that anti-junta forces had established control over 70 percent of Kalay Township’s 100 villages.