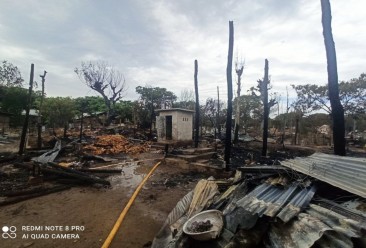 Junta troops killed at least three people, including two elderly villagers, in a series of raids carried out in eastern Magway Region’s Yesagyo Township over the past week, according to local resistance sources.

A column of around 50 regime soldiers stationed in Min, a village located near the confluence of the Ayeyarwady and Chindwin rivers, began their attacks on two nearby villages on Monday, the sources reported.

The first village to be targeted was Hlaykhoke, located about 5km southwest of Min. It was subjected to three days of arson attacks that left more than a quarter of its 560 homes in ruins.

According to the leader of a local defence force, several dozen villagers were unable to escape the raid and were held at a local monastery until the soldiers left on Wednesday.

Although most were later released, at least two people burned to death after their homes were set on fire, and a third was shot as the soldiers were leaving the village on Wednesday morning, the leader of the YLK People’s Defence Force (PDF) said.

“The two who died in their homes were elderly invalids. The villagers who fled left them behind because they didn’t think the soldiers would harm them,” he told Myanmar Now.

The victims were a 90-year-old blind man named Mye and an 83-year-old paraplegic woman named Tin Myint, he said. The third person killed on Wednesday was identified as Pho Aung, a 40-year-old resident of the neighbouring village of Chan Yar.

According to the PDF leader, resistance forces based in the area attempted to defend Hlaykhoke, but were forced to retreat after coming under heavy fire.

“We tried to fend them off using the few weapons that we had, but in the end we had to withdraw our troops. We rescued some villagers and inflicted a few casualties on the enemy, but then they started torching the village,” he said.

After leaving Hlaykhoke—which had previously been attacked in January—the junta column proceeded to Nga Ta Yaw, a village about 4km northwest of Min.

According to the leader of the Yesagyo PDF, most of Nga Ta Yaw’s roughly 3,000 inhabitants had fled ahead of the arrival of the regime forces at around 9am on Wednesday.

He added that the group killed eight junta troops before being forced to retreat from the village. Two Yesagyo PDF members were injured in the clash, he said.

No civilian casualties have been reported in Nga Ta Yaw, but a Yesagyo PDF spokesperson said that the regime soldiers have set fire to almost the entire village.

“They spent the whole day setting fires. They started at the northern edge of the village, then moved on to the northwestern part. After that they started burning all the rest,” he said, speaking to Myanmar Now on Thursday.

“They rested for a while at around 10pm, but then resumed torching houses until this morning. They’re burning more at the southeastern edge of the village right now,” he added.

Military raids have forced the residents of at least 10 villages in the confluence area, which has a total of 43 villages, to flee their homes, according to local sources.