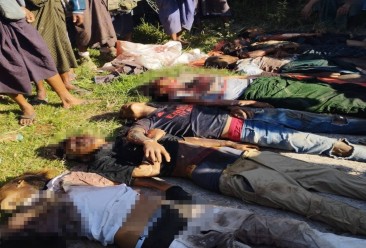 Two brothers aged 14 and 15 were among seven people tortured and murdered by junta troops in Sagaing Region’s Shwebo Township on Sunday, according to local sources.

The victims, who were all related, were residents of Wun Gyi, a village of around 100 households located in Khin-U Township, near the border with Shwebo.

According to a relative, they were detained while travelling together to Thabeikkyin Township in Mandalay Region, where they planned to look for work at a gold mine.

“This is a farming village, but a lot of people here also work at the gold mines when they’re not farming. It’s sad to see kids being killed like that,” said the relative.

Min Nyi and Zaw Hein were both in the seventh grade and had a one-year-old sister, said the relative, who did not want to be named.

A resident of Wun Gyi who also spoke on condition of anonymity said that the bodies of the victims had multiple gunshot wounds and showed evidence of torture.

“The bodies were riddled with bullets and were all badly bruised. I’m certain they were brutally tortured,” said the villager, who was part of a team that searched for the victims after they were abducted.

“We were afraid the military would arrive while we were retrieving the bodies, which were scattered around the road, so we couldn’t get a close look at them. But each one had at least three or four bullet wounds,” he added.

According to a member of a local defence force, the seven victims were taken into custody near a high school in the town of Shwebo, but their bodies were found on Monday in Khin-U Township.

“They were just dumped in a field near Ywar Thar. They were regular villagers who went out to work to make ends meet,” he said, adding that the site was around 5km north of a military recruitment and training centre.

Residents of Wun Gyi confirmed that the seven boys and young men killed on Sunday were the village’s first casualties since last year’s coup, which has met with strong resistance in Sagaing and other parts of the country.