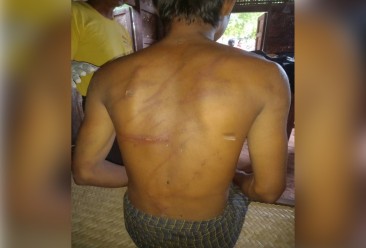 The bodies of two more men were discovered in southern Sagaing Region’s Salingyi Township on Wednesday, bringing the total killed there since the beginning of the week to seven.

According to an officer of the Salingyi People’s Defence Force (PDF), the bodies were found about 7km from Yae Min Taung, the village where most of the other bodies were discovered on Tuesday.

“They were buried near the road to Min Taw,” he said, referring to another village in the area. “We were looking for them all night Tuesday, but we didn’t find them until today.”

He added that bullet shells were found near the bodies, which the group had not yet exhumed. The identities of the victims could not be established, but they were believed to be in their late 30s or early 40s.

According to locals, around 100 regime soldiers entered Yae Mein Taung on Monday morning and remained there until the following evening, when they left with more than 20 men as hostages.

Four of the five bodies discovered on Tuesday were in Yae Mein Taung, while the fifth was found in Yae Mein Myauk, a neighbouring village a short distance to the north.

The Salingyi PDF officer said that the group also found another man who had apparently been left for dead lying on a dung heap just a few dozen metres from where two bodies had been buried.

“I think they threw him there thinking he had died. He had been beaten until he passed out, but he was still alive. His back was covered with boot prints and slash marks,” said the PDF officer.

He added that the group was providing the man with medical attention, but has not yet been able to speak to him about his ordeal. The victim was also unable to walk, he said.

Meanwhile, some local sources reported that the Yae Mein Taung villagers who had been taken hostage as human shields have since been released. However, Myanmar Now was unable to confirm this information.