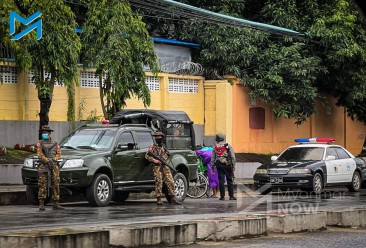 Two people were shot dead in Yangon on Friday in a pair of incidents targeting alleged military informants, according to local sources.

Hlaing Min Tun, the first victim, was killed by three gunmen on a motorcycle outside his home in Insein Township’s Da Nyin Kone ward at around 8am, residents of the area told Myanmar Now.

Another man named Khin Maung Nyein was also shot in the thigh at the same time, the sources said.

Both were taken to Yangon General Hospital, but Hlaing Min Tun reportedly died of his injuries before he could receive treatment, according to a member of an Insein-based social welfare group.

Hlaing Min Tun, 37, was the reserve commander of his neighbourhood’s fire station. He was also believed to be a military informant.

“Everybody hated him,” said a local resident. “People say that he was always with the military during every nightly guest list check.”

According to the source, Hlaing Min Tun had gone into hiding after the authorities warned him that he could be targeted next following the shooting of a traffic police officer in the area.

“He was assassinated not long after he resurfaced,” said the source, who did not want to be named.

No group has claimed responsibility for the killing, but it was widely believed to have been carried out by one of the many urban guerrilla groups operating in Yangon.

Naing Htoo Aung, the secretary of the civilian National Unity Government (NUG)’s Ministry of Defence, said that the incident was still under investigation.

He added that civilians were only targeted by anti-regime forces after it had been firmly established that they were collaborating with the junta in ways that endangered resistance forces or members of the public.

He said this included anyone who voluntarily joined a “public security force” established by the military.

“Those who voluntarily choose to take part in one of these ‘programs’ can and will be regarded as a military target, just like any other junta personnel, in accordance with international rules and regulations,” he said.

The second incident on Friday took place at the Thingangyun Township immigration office, where the deputy director was killed and the director was injured.

According to sources, two gunmen entered the immigration office in the township’s Lay Htaung Kan ward in the afternoon and opened fire on officials working there.

Kyaw Moe, the office’s deputy director, reportedly died shortly after the attack, while its director, Naing Win Htwe, was said to have survived his injuries.

The Yangon-based guerrilla group that claimed responsibility for the attack also declined to disclose any further information.

While it was not known why the office had been targeted, residents said that its officials were notorious for their corruption.

“They’re quite well-known for demanding large amounts of money for family-list and other registration services,” said a local resident who asked not to be identified.

A day before the two shootings, a pair of explosions in Yangon’s Shwepyithar Township reportedly left several people injured.

Both blasts took place on Nawarat Road—the first hitting the township’s ward 7 administration office at around 7pm, and the second targeting the ward 10 office about half an hour later.

A group calling itself the Yangon Urban Guerrilla Army claimed responsibility for both explosions.