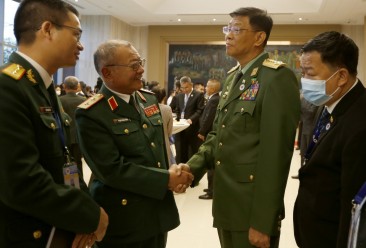 The US Department of Defense has withdrawn from the two-day ASEAN Defence Ministers’ Meeting (ADMM) Plus Experts’ Working Group on Counter Terrorism, co-chaired by the Myanmar military. The meeting opens today in Moscow.

Department of Defense spokesperson Lt Col Martin Meiners told Myanmar Now, “Russia and the Myanmar military regime have consistently used their co-chairmanship… to propagandize and justify the atrocities they are continuing to commit against innocent people, and to imply support for these atrocities by the ADMM Plus and its members”.

Lt Col Meiners said the conduct of Russia and the Myanmar junta breaches ASEAN values and their responsibilities as co-chairs of the working group.

In meetings last year, the Myanmar military used their co-chairmanship to assert that groups opposed to its rule, including the shadow National Unity Government and its armed wing, the People’s Defence Force, should be regarded as terrorist organisations. Disagreements over Myanmar’s role were revealed in a freedom of information request that the activist group Justice For Myanmar submitted to Australia’s Department of Defence.

Lt Col Meiners reiterated US support for ASEAN centrality but warned against the abuse of ADMM Plus meetings. “We urge all partners to use ADMM Plus mechanisms to pursue practical defence cooperation and dialogue in good faith, not to deliver propaganda,” he said.

The last-minute US withdrawal comes amid mounting pressure for a boycott of the meeting. Australia and New Zealand have also withdrawn their participation.

On July 14, 448 civil society organisations sent open letters to the USA, Japan and South Korea urging a boycott of the meeting and for the exclusion of Russia and the Myanmar junta in ADMM.

Japan and South Korea did not respond to a request for comment from Myanmar Now.

The ADMM Plus group includes the 10 member states of ASEAN, as well as Australia, China, India, Japan, New Zealand, Russia, South Korea, and the United States.

Khin Ohmar of the advocacy group Progressive Voice welcomed the US decision to not participate in the meeting and called on ASEAN to ban the Myanmar military from its meetings.

“By allowing Russia and the Myanmar military to co-chair this meeting, ASEAN is only encouraging this nefarious tie to deepen and emboldening the military junta to further commit atrocity crimes. At this point, the junta is stripping ASEAN of any reputation it may have left as a regional block”, she said.

The move came after activist group Justice For Myanmar urged ANZ, Singapore’s UOB and Vietnam’s BIDV to stop dealing with Myanmar military-owned Innwa Bank earlier this month, citing leaked transaction files of payments between the banks. The group said at the time that continued international engagement with Innwa Bank illustrated “a failure of governments to take a coordinated approach to isolated military conglomerates and cutting off the junta’s sources of revenue.”

Five members of Yangon-based urban guerrilla force Wi Moutti were arrested on November 22 in Yangon, according to a spokesperson for the group. The junta authorities tracked them down after their national identification cards, along with explosives and ammunition, were allegedly seized in a raid earlier this month. The regime announced the next day that four men and a woman who were members of an anti-regime guerrilla group were captured at two separate locations in Yangon. In its statement, the military accused them of stealing 20m kyat (nearly US$9,500) from a ticket counter at the train station in Pazundaung Township on November 1, which the spokesperson of Wi Moutti rejected as untrue. Myanmar Now is unable to verify either parties’ claims independently.

Two regime-appointed local administrators were shot dead by gunmen in Yangon’s Dagon Seikkan Township on the morning of November 28, according to a source within the police force.

Ward administrator Kyaw Than and 100-household administrator San Win Hlaing sustained injuries in their abdomen and thighs and died en route to the hospital, said the source. Pro-military media channels reported that the two men were at a Buddhist community hall in Dagon Seikkan’s 81st Ward when the two gunmen arrived, initially saying they wanted to report guest registration before opening fire. A driver named Aung Naing Thu was also injured in the shooting but survived the attack. No Yangon-based urban guerrilla group has claimed responsibility for the shooting so far.

Ousted Rakhine State chief minister Nyi Pu, who is currently being held in Sittwe Prison, is losing more of his eyesight as his cataracts progress and he is denied a medical intervention, a relative told Myanmar Now. Kyi Kyi Oo, his daughter, said that he developed the eye condition prior to the coup and that it had worsened since he was imprisoned in February 2021. She said that the family has not been able to see him in person, despite visiting the detention centre on multiple occasions.

Nyi Pu has been handed a sentence of more than 11 years for various criminal charges filed by the military, including incitement, corruption and voter fraud. He was arrested in Gwa on February 1 as the coup unfolded, along with other chief ministers appointed by the elected NLD government. He was initially released the following day and placed under house arrest, but was again imprisoned on February 10.