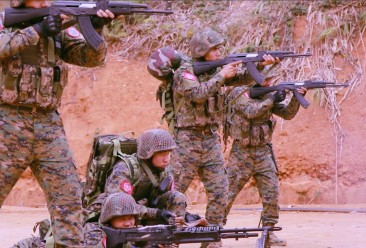 Thousands of locals have been displaced in northern Rakhine and southern Chin states over the past week amid intensifying clashes between Myanmar’s military and the Arakan Army (AA).

The latest escalation of hostilities began on August 20, when the two sides started fighting near the villages of Ah Baung Thar, Hna Ma Dar, Tha Htay Kone, and Kant Lay, all located west of the Kaladan River in southern Chin State’s Paletwa Township.

Last Monday, on the third day of fighting, an artillery shell fired by the Myanmar army exploded in Ah Baung Thar, injuring three local men, according to a woman who lives in the village.

“The shell exploded near their house while they were cooking. They haven’t been able to go to a hospital, so they are being treated with whatever medicine is available to them here,” said the woman.

“They clashed very close to our village on Sunday and Monday, and many shells exploded near people’s houses,” she added.

On Wednesday, another resident of Ah Baung Thar was killed by a landmine, she said. The victim was identified as Nan Lao San, the 46-year-old wife of the village’s primary school headmaster.

The incident occurred while Nan Lao San was looking for her husband, who had gone out three days earlier to collect bamboo shoots but had not returned, the woman told Myanmar Now.

It was unclear which of the two armed groups planted the mine near the village.

The entire village of more than 120 households has since fled to to the town of Paletwa, which is less than 6km away. Most are now sheltering with relatives or in local churches, said the woman, who was among the displaced villagers.

According to another Ah Baung Thar resident, the two sides were still fighting at the time of reporting. AA soldiers now occupy the deserted village, while junta troops are stationed in nearby hills, he said.

“The hills are visible from the village. They’re just about a 10-minute walk away,” the villager said.

According to other local sources, about 1,000 residents of other villages in the area have also fled their homes, but are unable to reach Paletwa due to the fighting.

Those who do make it to the town have reportedly been turned away from five camps set up to receive displaced civilians, under orders from the junta’s township authorities.

“The camp administrators say they can’t accept them because the fighting is not happening within their villages,” said one Paletwa resident who spoke to Myanmar Now.

Residents of the town say that they can still hear the sound of shelling and military aircraft coming from the combat zone.

“The military is using both fighter jets and helicopters, but we can only hear them from here. We can also hear shelling on a daily basis,” said one Paletwa local.

Fighting near Paletwa began in late May, after which the military imposed a 6pm-6am curfew on the town. Residents said they believed the latest clashes were part of an AA offensive to take control of the area.

Meanwhile, fighting has also been reported in parts of northern Rakhine State, near Myanmar’s border with Bangladesh.

On Friday afternoon, the AA attacked a strategic hill base in Hka Maung Seik, a village in northern Maungdaw Township, according to locals sources.

The AA reportedly engaged in an hour-long clash with around 50 junta troops and members of a Border Guard Force (BGF) stationed at the base, said a local man who had fled the fighting.

“The sound of the shelling was very close to our village, which is near the military camp. There’s nobody left in the village now. Everyone has fled,” said the man.

According to a resident of Min Kha Maung, a village located about a kilometre from Hka Maung Seik, a column of around 50 regime soldiers arrived there on Friday evening and left at around 9pm after questioning the village administrator and taking 12 residents hostage.

Myanmar Now was unable to independently verify this claim.

Until last month, there were around 100 junta troops and BGF members stationed at the hill base in Hka Maung Seik, which is located about 35km north of the town of Maungdaw. However, about half have since been redeployed to another strategic base that came under attack by the AA on July 18.

That base, located near the village of Kyein Chaung, played a key role in fighting between the Myanmar army and the AA prior to an informal ceasefire that began in late 2020.