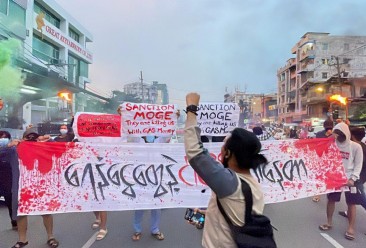 A wave of global revulsion greeted the news last month that Myanmar’s military junta had executed four pro-democracy activists on bogus charges. For all their words of condemnation, however, global powers have so far hesitated to strike the regime in the place that would hurt it the most: its pocketbooks, through the massive profits they draw each year from fossil fuel extraction. If the international community is serious about opposing the military’s crimes, it is time to end its refusal to sanction oil and gas. Doing so would not only punish the junta and hold it accountable—it would also hinder its ability to commit future crimes.

To be sure, the executions in late July were not the first time the military has killed civilians. Since seizing power in a lawless coup in February 2021, the junta has murdered more than 2,200 pro-democracy activists, civil disobedience demonstrators, and other civilians. Thousands more have been detained, arrested, tortured, and disappeared. The military is also waging a campaign of terror in areas of the country populated mostly by ethnic minorities—carrying out airstrikes and arson attacks to decimate entire villages with total disregard for human life. And this is not even to mention its genocidal attacks on the country’s Rohingya ethnic minority that it began five years ago this month.

But by carrying out the first official executions in Myanmar in more than three decades, against beloved high-profile members of the country’s pro-democracy movement, the military has signalled that it is prepared to continue its escalation of atrocities if that’s what it takes to strengthen its grip on power.

Unsurprisingly, the international community was appalled by the military’s actions. A number of governments issued strong words of condemnation, and even some regional power brokers that have so far been relatively quiet on the situation in Myanmar—such as India—broke their silence in the wake of these state-sponsored murders.

But while the global outrage over the executions has resulted in a fresh outpouring of words, it remains to be seen if it will prompt more concrete measures. The United States has already imposed targeted sanctions on high-ranking military officials and many of the corporate entities they use to enrich themselves. What more could they do?

It turns out, much more. As swiftly as the US imposed sanctions last year, and as vocal as it has been in condemning the junta’s horrific actions, it has stopped short of blocking one of the military’s biggest profit streams: oil and gas revenues. Economic analysts calculate the Myanmar military earns nearly $1.5 billion each year from these industries, making up roughly 10% of the junta’s total annual revenue and approximately half of its foreign currency income. As long as this money keeps flowing, Myanmar’s military will able to continue purchasing the guns, planes, jet fuel and other military supplies that it uses to terrorise the country’s civilian population. If the international community truly wants to hobble the military, then, oil and gas sanctions will have to be on the table.

In the wake of last month’s executions, there are signs that more US politicians have begun to wake up to this fact. Recent reporting indicates that senior members of the Biden administration, as well as high-ranking members of the House and Senate Foreign Relations Committees (see here, here, here, and here), are actively weighing oil and gas sanctions. And a bill that would help to hold Myanmar’s military accountable, known as the Burma Unified through Rigorous Military Accountability, or BURMA, Act, has already passed the House. Senate leaders just need to approve the bill for markup and then take it up for a vote.

But pockets of opposition remain. After a spring and summer of record-high energy prices, further restrictions on oil and gas can sound like a tough sell. And some critics of sanctions worry about the indirect collateral consequences they could have on ordinary Myanmar citizens already suffering under military rule. However, these targeted sanctions would take aim directly at the Myanma Oil and Gas Enterprise (MOGE)—a massive conglomerate controlled by the Myanmar military, all of whose profits go to enrich the junta. And sanctions can be designed to only halt revenue flows, without shutting down gas production itself. EU sanctions imposed in February have already done so for a small portion of euro-denominated gas revenues.

Profits should never be put above human lives, and the world will need to transition away from fossil fuels entirely by the end of the decade if we are to avoid the most catastrophic effects of climate change. Why not start with the oil and gas projects that are being used to enable one of the worst dictatorial regimes on the planet?

Taken together, the arguments to hold off on sanctions any longer don’t hold water. The people of Myanmar have waited too long already for the justice and democracy they deserve. The United States should go after the junta in a way that it will notice: by cutting off the billion-plus dollars it rakes in each year off the backs of the people of Myanmar.

Myra Dahgaypaw is Senior Partnership Officer for International Justice and Accountability at the Unitarian Universalist Service Committee. She is also a former IDP and refugee from Karen State.